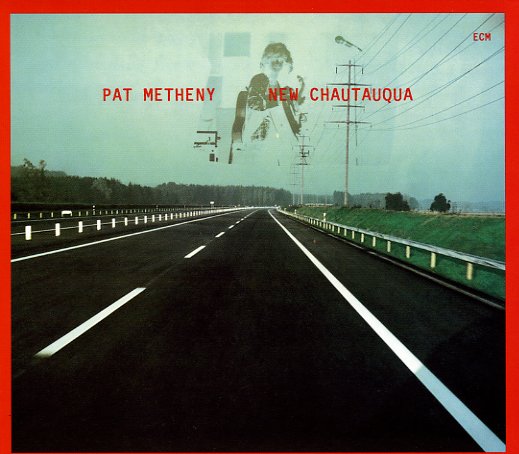 A completely solo album from Pat Metheny – but one that still sparkles with the same sort of energy as his fuller group sessions for ECM! At a point when Pat could be content to simply scrawl a few simple lines on the strings of his guitar, he instead does a great job of complicating things here – working with a bit of overdub to explode in fuller sounds that are totally great – played on acoustic and electric guitars, including 6, 12, and 15 stringed versions – as well as a bit of bass. Titles include "Hermitage", "Daybreak", "Sueno Con Mexico", "New Chautauqua", and "Country Poem".  © 1996-2022, Dusty Groove, Inc.
(US pressing. Cover has light wear.)

American Garage
ECM, 1979. Near Mint-
LP...$13.99
A brilliantly evocative album from Pat Metheny – one that's got a quietly epic feel, as Pat and group soar out across the American landscape in a set of tunes that subtly explore space and sound while still remaining wonderfully fluid. There's nothing forced here, and nothing too slick ... LP, Vinyl record album

Om With Dom Um Romao
ECM, 1978. Near Mint-
LP...$29.99
To us, this recording represents what was great about ECM in the mid 70s, searching improvised grooves that cross the lines between free playing, textural tone bending, ethnic influences and modern fusion, but without getting too new-agey. Om were a quartet of European improvisers, many of whom ... LP, Vinyl record album

Following Morning
ECM, 1976. Near Mint-
LP...$19.99
The basshapes of Eberhard Weber are already great enough in a spare, stripped-down ECM setting – but here, they get great exposure amidst some even more compelling tonal landscapes – as Weber works with strong solo piano from Rainer Bruninghaus, and rich sounds on celli, oboe, and ... LP, Vinyl record album