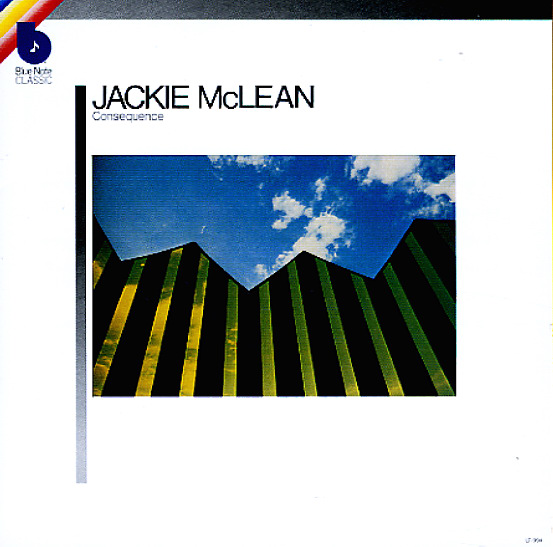 A great slice from Jackie McLean's rare unissued 60s sessions for Blue Note – a rollingly soulful session that stands in stark contrast to some of his more modern sides of the time! The set's got Jackie working with a group that includes Lee Morgan on trumpet and Harold Mabern on piano – in a vamping, soaring vibe that's similar to the feel of contemporaneous Morgan sessions like The Gigolo or Tom Cat – but which has a slight bit of McLean's more modernist edge from time to time. Mabern's piano work is tremendous – filled with life and joy that soar the album effortlessly along – and the lyrical drum work of Billy Higgins and basslines from Herbie Lewis are also very much a key part of this groove. The set was originally recorded in 1965, but only made a first appearance on record in 1979 – and even then, only briefly! Titles include "Vernestune", "Slumber", "Bluesanova", "Consequence", and "Tolypso".  © 1996-2022, Dusty Groove, Inc.
(Original pressing. Cover has a small cutout hole in one corner.)

New & Old Gospel
Blue Note, 1967. Near Mint-
LP...$43.99
One of Jackie McLean's last "new thing" albums for Blue Note – and a very unique record that features Ornette Coleman on trumpet! The sound here is stark and hard – slight hints of the soulfulness that the "gospel" in the title might imply, mixed with the angular ... LP, Vinyl record album

Walkin & Talkin
Blue Note, 1959. Near Mint-
LP...$59.99
Walkin, Talkin, and Wailin – one of Bennie Green's most soulful sessions, and a monster groover that shows that Blue Note could cook with the best when they wanted to! Bennie's working here with a great little group – featuring core rhythms by the Gildo Mahones trio, plus some great ... LP, Vinyl record album