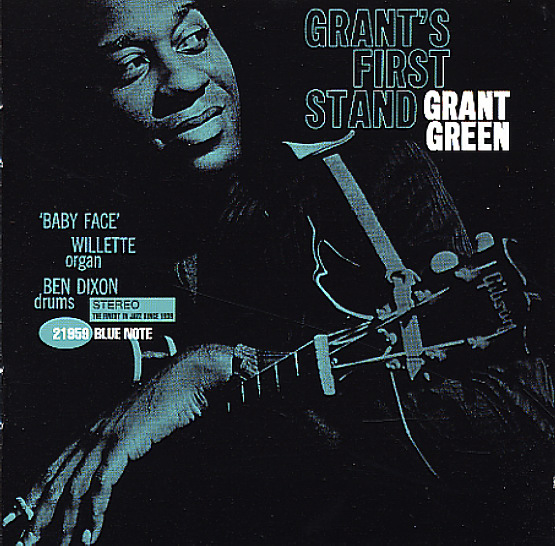 Grant's First Stand – and a mighty one at that! The set was recorded when Green was a guitarist fresh on the scene – showing up in New York from St Louis, where he'd been discovered by Lou Donaldson and brought to Blue Note with great acclaim! For this first date, Green's heard in really stripped-down company – just Hammond from Baby Face Willette and drums from Ben Dixon – a spare trio setting that makes for a madly cooking little record, and one without some of the smoother edges of Greens' later years! The set's as raw and soulful as Willette's own Blue Note classics – and is very much in the side of the spectrum that Donaldson was bringing to the label at a time – a much-needed dose of new energy from the Prestige Records side of the tracks. Every track's a winner – and titles include "Blues For Willarene", "Baby's Minor Lope", "Miss Ann's Tempo", and "A Wee Bit O Green".  © 1996-2022, Dusty Groove, Inc.
(Out of print 1999 pressing.)

Complete Quartets With Sonny Clark
Blue Note/Jazz Heritage, 1962. Used 2CD
CD...$12.99
Although Grant Green has been getting a lot of attention lately for his heavy-duty funk work of the late 60s, it's the subtly beautiful work of the early 60's that first caught our attention years ago. From the start of his young career, Green was an amazing player who had developed a unique ... CD

Green Street (with bonus tracks)
Blue Note, 1961. Used
CD...$9.99 (CD...$9.99)
One of the earliest albums as a leader from guitar genius Grant Green – and a set that shows off a different side of his talents than some of his other records of the time! The date has Grant working in a trio – with Ben Tucker on bass and Dave Bailey on drums – a super rhythm ... CD

Retrospective 1961 to 1966 (4CD set)
Blue Note, 1960s. Used 4 CDs
CD...$44.99
A wonderful 4 disc box set documenting one of our favorite jazz guitarist's work for one of our favorite jazz labels. We initially got hip to Grant Green on his amazing funky jazz sides, but as we made our way back through his recording career, we discovered a wealth of sublime material. The ... CD

Solid (with bonus track)
Blue Note, 1964. Used
CD...$18.99
An excellent set by Grant Green – recorded in 1964, but not issued until close to 1980, when Blue Note first pulled it out of the vaults, and dropped it on the world! The session's a great one – with an unusual lineup that features Green's guitar in a sextet, with McCoy Tyner on piano, ... CD

Green Street (RVG remaster edition)
Blue Note, 1961. Used
CD...$9.99 (CD...$9.99)
One of the earliest albums as a leader from guitar genius Grant Green – and a set that shows off a different side of his talents than some of his other records of the time! The date has Grant working in a trio – with Ben Tucker on bass and Dave Bailey on drums – a super rhythm ... CD

Born To Be Blue
Blue Note, 1962. Used
CD...$6.99 9.99
A rare one from Grant Green – recorded in 1962, but not issued until 1985. The set's one of Green's early classics recorded with pianist Sonny Clark – a deeply soulful player who really had the right feel for Green's more lyrical soul jazz numbers. The rest of the group includes Ike ... CD