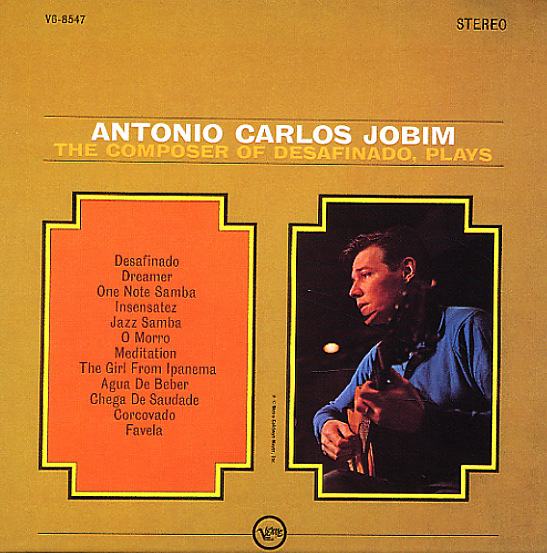 Antonio Carlos Jobim's classic Verve session from 1963 – a tremendous record, done with a wonderful airy sound that became the trademark for bossa production in America – and which also had a great inspiration on the sound of mid 60s bossa in Brazil! Claus Ogerman arranged and conducts the orchestra, and Jobim plays guitar and piano – with a core group that also features Jimmy Cleveland on trombone and Leo Wright on flute, both American jazz players who help add some further complexities to the sound. Tracks include "Jazz Samba", "Favela", "O Morro", "Aqua De Beber", "Girl From Ipanema", and "Chega De Saudade".  © 1996-2022, Dusty Groove, Inc.
(Early 80s record club pressing. Cover has light wear, a center split in the top seam and light fading on the spine.)

Wave
CTI/A&M, 1967. Very Good+ Gatefold
LP...$34.99
A stunning mix of talents that brings the heavenly piano and guitar of Antonio Carlos Jobim into play with the lush, but light arrangements of Claus Ogerman – a swirling mix of post-bossa loveliness that redefines Jobim's sound, and opens up new avenues for exploration in sound! The ... LP, Vinyl record album

Tide
A&M, 1970. Near Mint- Gatefold
LP...$59.99
An incredible record – from the first off-key note to the last! The album's filled with some wonderfully moody LA studio sounds, arranged by Deodato, and a has a great swirling mix of sound that weaves around Jobim's lofty guitar and piano beautifully – complex, but still with the airy ... LP, Vinyl record album

Shadow Of Your Smile
Verve, 1965. Very Good
LP...$24.99
One of Astrud Gilberto's greatest albums – and quite possibly our personal favorite! The record features beautifully understated arrangements by Joao Donato, Don Sebesky, and Claus Ogerman – and the instrumentation is a haunting mix of bossa rhythms with darker orchestrations that ... LP, Vinyl record album

Barra Limpa
Verve, 1967. Very Good Gatefold
LP...$8.99
Incredible work from Luiz Henrique – one of our favorite singers of the 60s bossa era, heard here with some completely sublime arrangements! Luiz has a bit more jazz in his voice than some of his contemporaries – a great ability to sing both regular lyrics and wordless scatting – ... LP, Vinyl record album

Certain Smile, Certain Sadness
Verve, 1966. Very Good+
LP...$29.99
Kind of a dream combination in one little album – especially if you dig breezy bossa from the 60s! Back in 1966, Verve Records got the great idea of teaming up its (then) biggest Brazilian imports – vocalist Astrud Gilberto and organist Walter Wanderley – both of whom were ... LP, Vinyl record album

Astrud Gilberto Album
Verve, 1965. Very Good
LP...$29.99 (CD...$8.99)
One of Astrud Gilberto's greatest albums of the 60s – a classic session produced for Verve by Creed Taylor, and featuring sweet gentle arrangements from Marty Paich, co-arranged with Antonio Carlos Jobim, who also plays guitar on the session next to the piano of Joao Donato! That's a ... LP, Vinyl record album

Rain Forest
Verve, 1966. Very Good+
LP...$24.99
An album that not only broke the bossa big in the US – but a set that also really helped transform the sound of the organ in jazz! Not only is the record a key meeting of bossa rhythms and jazz organ – transplanted hugely to the US after a big initial Wanderley run in 60s Brazil – ... LP, Vinyl record album

Diamond Land
Verve, 1988. Sealed
LP...$19.99
A beautiful American release from Toninho Horta – and one that features some great guest work by Joyce too! The sound here is a nice extension of Horta's early EMI albums in Brazil – a bit more jazz-based and somewhat polished – but still light years away from the sound of ... LP, Vinyl record album