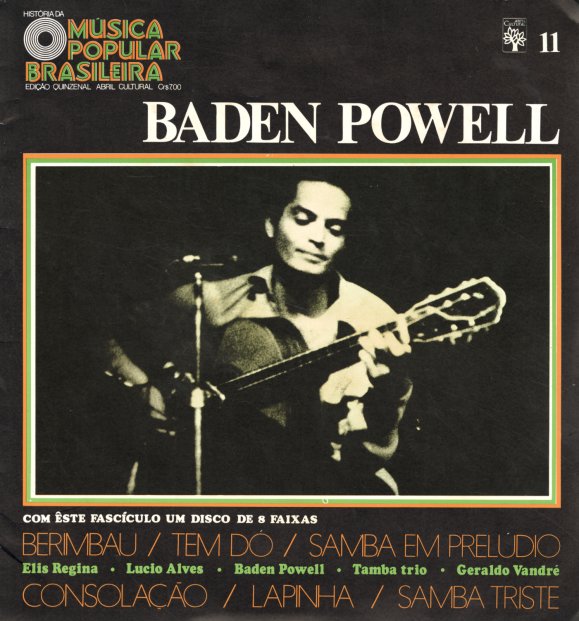 A wonderful tribute to Baden Powell – not only musically, but visually as well! The set contains a 12 page booklet that's filled with writings on Powell's work & other Brazilian musicians in the series, plus some excellent color photos from the 1960s. The record contains some of Baden's greatest tracks, played by him and other Brazilian greats. Titles include "Consolacao" by Tamba Trio, "Lapinha" & "Canto De Ossanha" by Elis Regina, "Samba Triste" by Lucio Alves, "Tem Do" by Os Cariocas, "Samba Em Preludio" by Geraldo Vandre E Ana Lucia, and "Astronauta" and "Berimbau" by Baden Powell.  © 1996-2022, Dusty Groove, Inc.
(Cover has light wear, old price sticker removal spot.)

Antologia
Philips (Brazil), 1974. Near Mint-
LP...$14.99
The group MPB4 pays tribute to some of the greatest Brazilian singers of the 20th Century, from Tom Jobim to Monsueto to Baden Powell to Nelson Cavaquinho. The LP features a number of different "pot pourri" sets dedicated to an individual singer. The group runs through tracks by the ... LP, Vinyl record album

Wonderful World Of Antonio Carlos Jobim
Warner, 1965. Very Good
LP...$12.99
The wonderful world of Antonio Carlos Jobim gets a whole lot bigger on this American release from the 60s – thanks to a collaboration with the great Nelson Riddle, the arranger whose work made so many of Frank Sinatra's albums so great! Riddle really understands the jazzy elements at the ... LP, Vinyl record album

Definitivamente
RCA (Brazil), 1974. Near Mint- Gatefold
LP...$24.99
Fantastic 70s material by this unique Brazilian combo! The sound is perhaps a bit less funky than some of their other records, but the songwriting is excellent, and the production is top notch – in a way that opens up the voices and gives the record a lot more soul than usual. Filled with ... LP, Vinyl record album

Para Viver Um Grande Amor
CBS (Brazil), 1983. Near Mint- Gatefold
LP...$16.99
An album of lushly-recorded tunes based around an original musical by Carlos Lyra and Vinicius De Moraes – featuring some of the original tunes from that work, plus additional tracks scored for the film. Jobim directed the entire project, and singers include Djavan, Olivia Byington, Dori ... LP, Vinyl record album

Em Tempo De Festival
RGE (Brazil), Late 60s. Near Mint-
LP...$9.99
Crucial work from a generation of Brazilian artists who were really opening up the scene at the end of the 60s – with titles that include "Jeitinho Dela" by Tom Ze, "Travessia" by Os Tres Morais, "Ponteio" by Titulares Do Ritmo, "Capoeirada" by Erasmo ... LP, Vinyl record album