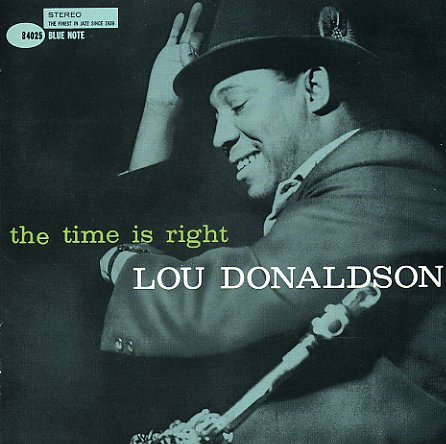 A beautiful album of mellow-grooving tracks from Lou Donaldson – recorded during his rich post-bop late 50s years, and done with a wonderfully warm sound! The group features Horace Parlan on piano, Blue Mitchell on trumpet, Laymon Jackson on bass, and Dave Bailey on drums – plus Ray Baretto added in on conga, giving the whole session a little bit of a kick with a light Latinish groove on the best numbers! The rhythm's nice and skittish – lightly leaping around on even the quieter numbers, and letting Lou blow his alto in the strongly rhythmic mode that was starting to appear in his recordings of the time. Titles include "Crosstown Shuffle", "Mack The Knife", "Be My Love", and "Lou's Blues".  © 1996-2022, Dusty Groove, Inc.

Quartet/Quintet/Sextet
Blue Note (Japan), 1952/1954. New Copy
CD...$13.99 (CD...$9.99)
Great early material from Lou Donaldson – with a hard-hitting bop sound missing from his later work! The tracks are short, raw, and lively – and filled with the kind of pre-hardbop soul that Donaldson was infusing into jazz, along with other players on the material – like Horace ... CD

Midnight Sun
Blue Note (Japan), 1960. New Copy
CD...$13.99
A killer from Lou Donaldson's early hardbop years at Blue Note – recorded right during his classic run of albums for the label, but not issued until many years later! There's a sweet bounce to most tracks here – the kind of vibe that Lou had most famously on his Blues Walk album – ... CD

Sassy Soul Strut
Blue Note (Japan), 1973. New Copy
CD...$13.99
Plenty of sass, and plenty of soul – a great mix of modes from the mighty Lou Donaldson – who's still pretty darn funky here, but in a way that's different than his small combo records from a few years before! The set has Lou expanding his sound a bit from the harder funk of Blue Note ... CD

Sophisticated Lou
Blue Note (Japan), 1972. New Copy
CD...$13.99
A really unique album for Lou Donaldson – especially for his early 70s run on Blue Note! The session lives up to its title by offering up a batch of soulful ballads from Lou – tunes that really focus on his sweet lines on alto, yet set amidst some larger backing arranged by Wade Marcus ... CD