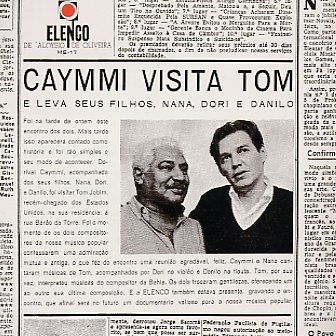 A landmark meeting of two Brazilian generations – important songwriter Dorival Caymmi, the man who introduced a new sense of poetry to Brazilian music – and the great Antonio Carlos Jobim, the man who revolutionized the world with his bossa nova arrangements! This set has a nicely lean vibe – the best Elenco Records style, served up with Jobim's sense of space and timing – as a perfect match for the vocals of Caymmi, who maybe sounds his best in this mode! There's lots of jazzy instrumentation on the set too – including great work on flute from Danilio Caymmi and guitar from the young Dori Caymmi – both soon to become big talents on their own. Nana Caymmi sings a bit too (her first on record?) – and titles include "Sem Voce", "Berimbau", "Tristeza De Nos Dois", "Vae De Vez", and "Das Rosas".  © 1996-2021, Dusty Groove, Inc.