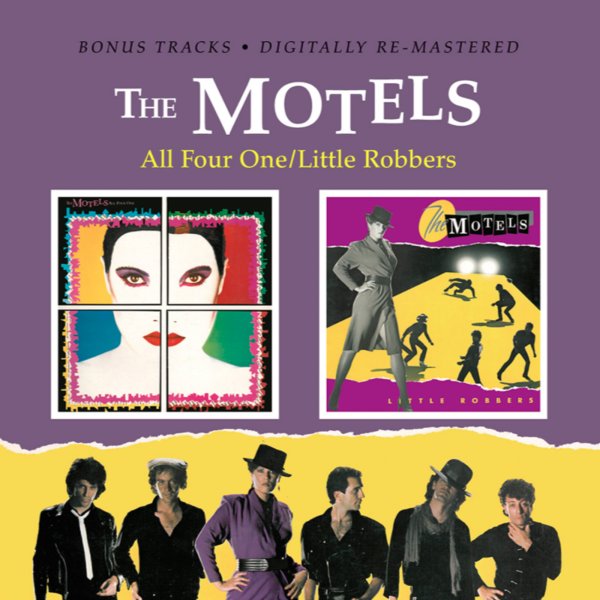 A pair of 80s pop classics from The Motels – back to back in a single set, and with bonus tracks too! First up is All Four One – a super-huge set from The Motels – and a record that still has the group holding onto a lot of credibility at a time when so much mainstream pop was really skewing towards the thin side of the spectrum! The vocals of Martha Davis are a big part of the album's success – as they've got this subtle sense of drama learned from the new role of female singers in the wake of punk rock, but tuned towards material that was maybe a bit more able to cross over on the charts – thanks to well-crafted guitar licks that underscore the best part of the lyrics. The approach is a nice balance – definitely less dated and a lot less cloying than some of Davis' contemporaries – on titles that include the hit "Only The Lonely", plus "Mission Of Mercy", "Take The L", "Change My Mind", "Art Fails", "So LA", "Apocalypso", "Forever Mine", and a remake of "He Hit Me (It Felt Like A Kiss)". On Little Robbers, The Motels are strongly in hit territory – the vocals of Martha Davis providing a nice blend of the rough and the smooth – in style that made the singer one of the real standouts in pop at the time! The group have a great way of brewing up the tunes – familiar elements that hint at drama, but never go too far – just the right balance to make the lyrics land perfectly, but never come off as overdone or insincere. Titles include the hit "Suddenly Last Summer" – plus "Where Do We Go From Here", "Monday Shutdown", "Isle Of You", "Footsteps", "Tables Turned", and "Remember The Nights". Bonus tracks include "Mission Of Mercy (apocalypso version", "Schneekin (apocalypso version)", "So LA (acpocalypso version)", "Who Could Resist That Face", and "Only The Lonely (live)".  © 1996-2021, Dusty Groove, Inc.