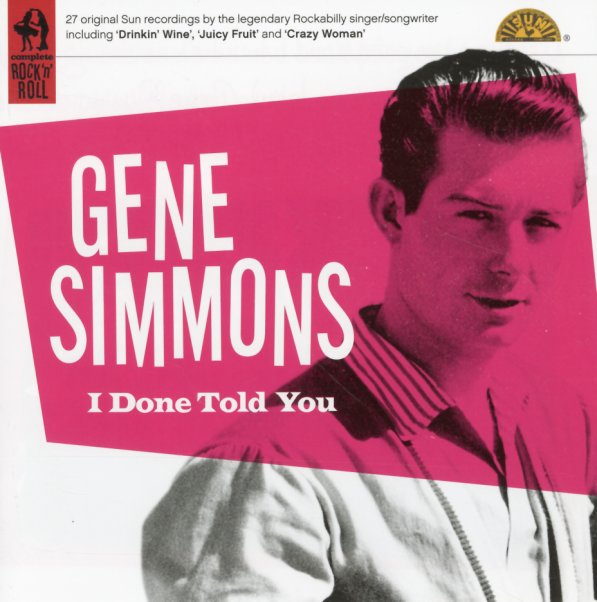 I Done Told You

Great early work from Gene Simmons – a Memphis singer best known for a later Halloween novelty record, but an artist here who's at the prime of his youthful powers – and very much an important part of the early sound of Sun Records! Gene was maybe getting more of his songs recorded by other artists at the time, but he's also a hell of a singer too – with a great mix of blues and hillbilly roots, fused into a spare style that really brings out the moodier elements in his music, and which is light years from more mainstream rock and pop – those farther reaches that always yield plenty, if you know where to dig into the Sun Records catalog! The set features 27 tracks from these early years, including some alternates too – and titles include "Drinkin Wine", "Juicy Fruit", "Mom & Pop", "Money Money Money", "I Done Told You", "Crazy Woman", "If I'm Not Wanted", "Drinkin Scotch", "Down On The Border", "Gene's Jumpin Jive", "You Can't Break The Chains Of Love", and "Peroxide Blonde & A Hopped Up Model Ford".  © 1996-2021, Dusty Groove, Inc.