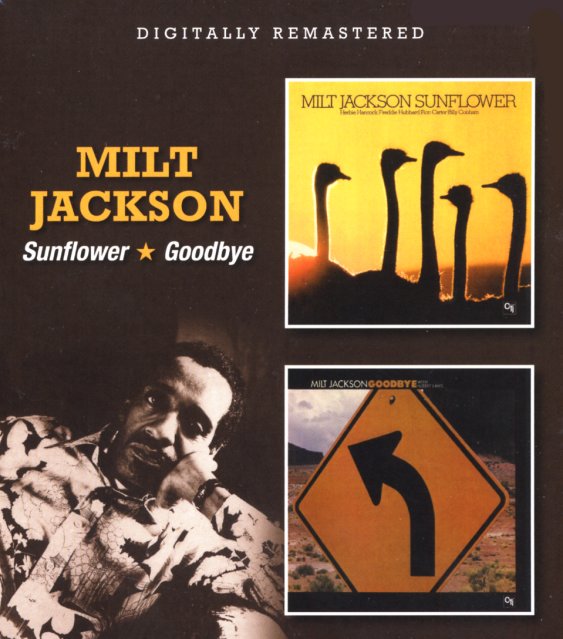 Two CTI label gems from vibist Milt Jackson – back to back on a single CD! Sunflower is proof that Milt Jackson was easily the hippest member of the Modern Jazz Quartet – and one of the few who could really open up into different sounds away from that combo! This sweet 70s set for CTI is totally great – a whole new chapter for Jackson's vibes, and a real re-setting of the soulful modes he'd explored as a leader in the 60s. There's a wonderfully warm and chromatic feel to the set from the start – as Milt's vibes are set in fuller arrangements from Don Sebesky – with added instrumentation from Herbie Hancock on electric piano, Freddie Hubbard on trumpet, and Phil Bodner on reeds. The highlight of the album is a nice long take on "People Make The World Go Round", but it's all pretty sweet, and other titles include nice versions of "Sunflower" and "What Are You Doing For The Rest Of Your Life" – and Jackson's own "SKJ" and "For Someone I Love". Goodbye is classic work from vibist Milt Jackson – opening up his bag a lot for the 70s, in a way that makes for some wonderfully casual grooves! The album's not as moodily funky as some of Jackson's other CTI records, but it is a nice batch of laidback tunes played with a distinctly soulful edge – handled by a group that features Cedar Walton on piano, Hubert Laws on flute, Ron Carter bass, Steve Gadd drums – and some guest trumpet from Freddie Hubbard on the track "SKJ". Other titles include "Opus De Funk", "Detour Ahead","Goodbye", and "Old Devil Moon".  © 1996-2021, Dusty Groove, Inc.