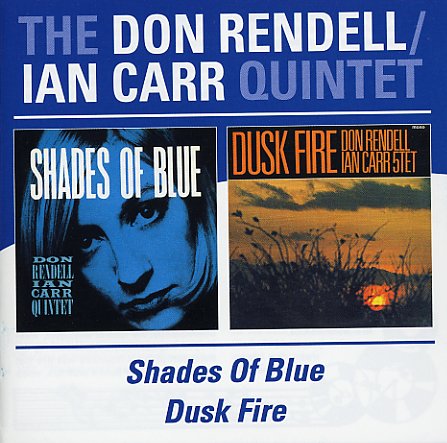 Some of the greatest British jazz of the 60s – two early albums by the groundbreaking Ian Carr/Don Rendell quintet! Shades Of Blue is the debut of a legendary British jazz group – one who not only gave that nation's scene a fresh voice in music, but who also really set the tone for many other acts to come! After a stretch when the London scene was doing a great job of matching American efforts in bop and swing, players like Don Rendell and Ian Carr found a way to really carve out some bold space of their own – here, by matching their own strong sense of writing and arranging, always filled with beautiful tone and color, with some of the more modern phrasing and styles that were just creeping up around town. The set's not nearly as experimental as the work of Joe Harriott, but has all the hallmarks of that generation's openness to new ways of expression – often given a surprisingly soulful swing, and captured perfectly as one of the early entries in the famous Lansdowne Series recordings. The rest of the group is equally great – and in addition to Rendell on tenor and soprano sax, and Carr on trumpet and flugelhorn – the combo includes Colin Purbrook on piano, Dave Green on bass, and Trevor Tompkin on drums. Titles include "Garrison 64", "Blue Mosque", "Just Blue", "Latin Blue", "Sailin", and "Big City Strut". Dusk Fire has a great group getting even better – as the legendary pairing of tenorist Don Rendell and trumpeter Ian Carr is joined by pianist Michael Garrick – who was really helping to shape the sound of British jazz at the time! The album's only the second from the Rendell/Carr Quintet, but it's already moving strongly forward – with this sense of composition and focus that's really amazing – served up in original tunes by all three creative forces in the lead – often with this great balance between soulful swing and modern ideas that makes the whole thing a dream all the way through! Don plays tenor, soprano sax, flute, and clarinet; Carr plays trumpet and flugelhorn; Garrick is on piano, Dave Green is on bass, and Trevor Tomkin is on drums – on titles that include "Prayer", "Dusk Fire", "Hot Rod", "Spooks", "Jubal", and "Tan Samfu".  © 1996-2023, Dusty Groove, Inc.