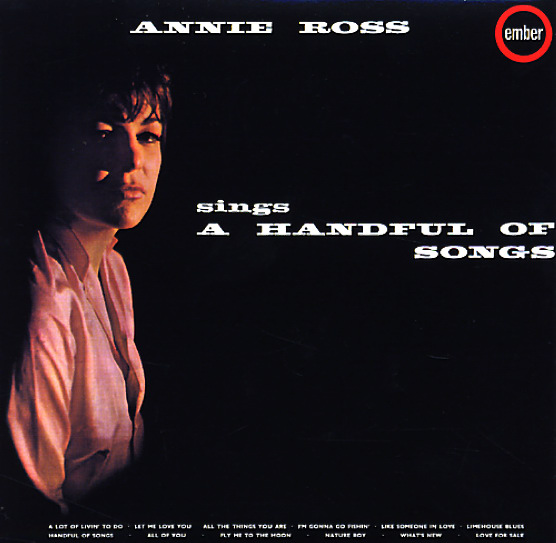 An overstuffed package of work from Annie Ross – one that features a few key albums, plus some rare bonus tracks too! First up is A Handful Of Songs – which has Ross recording as a solo act back in England after leaving her famous group with Dave Lambert and John Hendricks! The style here is a bit like some of the solo work that Ross cut in the US at the end of the 50s – particularly her sides for Pacific Jazz – not as vocalese and solo-oriented as the sort of recordings that first got her noticed, but still a lot more dynamic than most straighter jazz singers of the time! Arrangements are pretty groovy overall – nicely jazzy, and penned by Johnnie Spence – also produced by John Barry, who really helps keep the right sort of "punch" in the set. Titles include "Fly Me To The Moon", "Nature Boy", "A Lot Of Livin To Do", "Like Someone In Love", "A Handful Of Songs", and "All Of You". Next is A Gasser – one of Annie Ross' rare albums as a solo act away from her trio with Jon Hendricks and Dave Lambert – and a great little session cut with small combo jazz backing, which gives the song a nice swinging edge! Zoot Sims is the main soloist on the tunes, Russ Freeman lays down piano tracks to set the mood – and other players include Jim Hall, Monte Budwig, Mel Lewis, and Bill Perkins – all of whom contribute wonderfully to the album, and give it a nicely grooving west coast finish. Titles include "I Was Doing Alright", "You Took Advantage Of Me", "Lucky Day", "Lucky So & So", and "Nobody's Baby". 2CD set also features material from the London cast recording of Cranks – which features Ross with Anthony Newley – plus some songs with Lambert, Hendricks, & Ross – and the tune "Let's Fly" by Johnny Mercer & The Pied Pipers, which was written by Ross.  © 1996-2021, Dusty Groove, Inc.