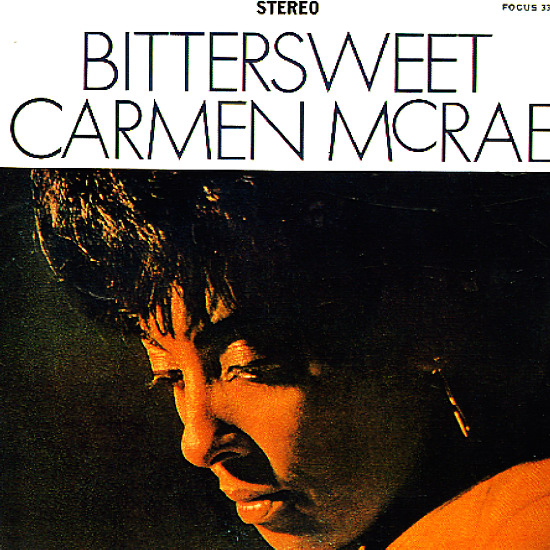 Here's a rare one from Carmen – a beautifully understated session recorded for the tiny Focus label, done with spare and soulful backings from Norman Simmons, who leads the album's small combo on the backing. Tracks are nice and mellow – very different than some of the later work Carmen would do for Atlantic, and with a solid jazz-based approach that really lets her work through some wonderful vocal inflections. Titles include "How Did He Look", "Ghost Of Yesterday", "I'm Lost", "Come Sunday", "Second Chance", "If You Could Love Me", and "I'm Gonna Laugh You Right Out Of My Life".  © 1996-2023, Dusty Groove, Inc.
(Japanese pressing, with obi – P 6178A. Cover has some very light aging on the top seam, but is great overall.)

Invitation
Official (Denmark), Late 50s. Very Good+
LP...$4.99
(Cover has light waviness and a trace of a stain on the back - due to moisture.) LP, Vinyl record album

Fine & Mellow – Live At Birdland West
Concord, 1988. Near Mint-
LP...$1.99 4.99 (CD...$5.99)
A mighty nice setting for Carmen McRae, and a bit different than usual too – especially given that the backing group is a pretty soulful tenor/organ combo! Jack McDuff handles the Hammond, and Red Holloway plays both tenor and alto, with some nice comping from Phil Upchurch on guitar in the ... LP, Vinyl record album

Crystal & Velvet
Focus, 1981. Near Mint-
LP...$4.99
A very cool, very unusual album from the hip singer Bobbi Rogers – a vocalist we might put in the company of Blossom Dearie! The set features Bobbi singing with great guitar accompaniment from Gene Bertoncini – on titles that include "Once You've Been In Love", "Two For ... LP, Vinyl record album

Tommy Wolf Can Really Hang You Up The Most
Focus, 1980. Near Mint-
LP...$2.99
A lovely little tribute to one of our favorite songwriters of all time – the lyrical genius Tommy Wolf, whose compositions were first championed back in the 50s and 60s by Bob Dorough, Jackie & Roy, and Blossom Dearie! Wolf's got a wonderful way with a twist of a phrase – playful, ... LP, Vinyl record album