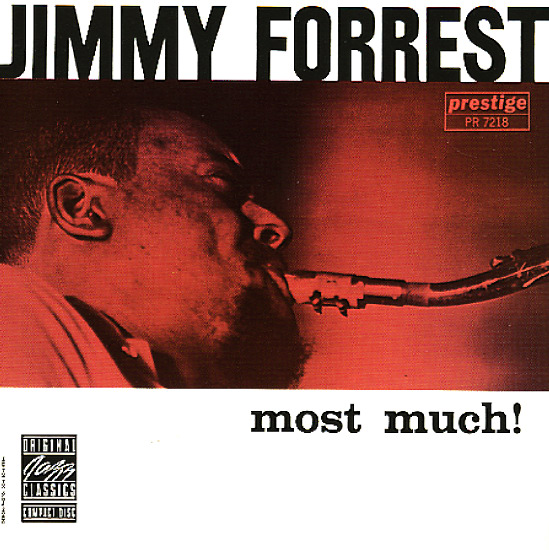 Gutsy tenor work from Jimmy Forrest – a player who was poised to rival Sonny Stitt and Gene Ammons at the start of the 60s, and who could have easily done so, given the strength of his work for Prestige! The record's one of a few that the St Louis player got to cut for the label – and it's a tightly-crafted combo effort that features Hugh Lawson on piano, Tommy Potter on bass, and Clarendon Johnson on drums – plus a bit of added conga from Ray Barretto, bringing in that extra "kick" that pushed off other great soul jazz sessions from the time! Tracks are short, and have a good focus on Forrest's wonderful tone – and titles include "Sonny Boy", "Annie Laurie", "I Love You", "Most Much", "Soft Winds", "Matilda", and "Autumn Leaves".  © 1996-2023, Dusty Groove, Inc.
(Slight crease and sticker on traycard artwork.)

Sit Down & Relax With Jimmy Forrest (with bonus track)
Prestige/OJC, 1961. Used
CD...$19.99
Nice late night session that has Jimmy Forrest's deep deep tenor fronting a quintet that includes guitarist Calvin Newborn and pianist Hugh Lawson. The groove is nice, easy, and very relaxed, with the kind of St. Louis soul jazz playing that made Forrest a legend back in the 60's. You'll ... CD

Max Roach Quartet Featuring Hank Mobley
Debut/OJC, 1953. Used
CD...$29.99
Killer stuff! Despite the early date and boppish orientation of the material on this CD, the tracks have a sinister modernist edge that easily belies the later work of both Max Roach and Hank Mobley – and which presents the pair here working with unbelievable power! The set kicks off with ... CD

Red's Blues
Prestige, Late 50s. Used
CD...$4.99
A cool collection of bluesy work from Red Garland – material pulled from the pianist's famous late 50s years on Prestige Records, including a number of cuts that weren't issued at the time of release! Some of the tracks here feature Garland working with a trio, while others have a horn ... CD

Dreams & Explorations
Riverside/OJC, 1964. Used
CD...$19.99
Easily one of the most modern recordings made by pianist Don Friedman in his early years – a set of forward-thinking numbers done with a quartet that includes guitar Atilla Zoller! As with Zoller's own work from the time, there's a freewheeling approach here that slides effortlessly between ... CD

Beat Goes On
Prestige (Japan), 1965. Used
CD...$24.99
A fantastic album from Sonny Criss! The record is one of his excellent late 60s "comeback" sides for Prestige – and it features incredibly solid, confident, and hard alto solos, blown with a tremendous amount of imagination. Bob Cranshaw and Alan Dawson provide excellent rhythm ... CD