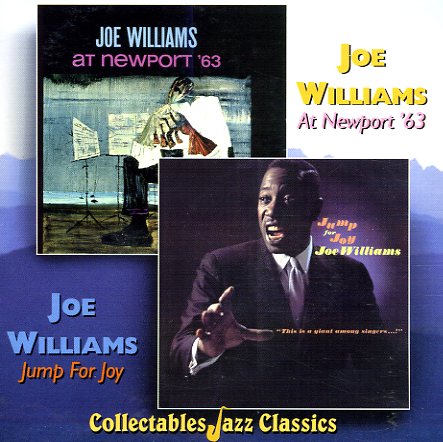 2 of Joe's best records of the 60s! At Newport is a nicely relaxed live set has Joe hitting a very soulful groove – one that's much more open than on some of his studio albums, which are often far too cluttered to swing. Backing is by an all-star group that includes Coleman Hawkins, Junior Mance, and Zoot Sims – and Joe is in fantastic small combo company, really letting loose on tracks that include "Gravy Waltz", "Come Back Baby", "April In Paris", "Some Of This N Some Of That", and "She's Warm, She's Willing, She's Wonderful". Jump For Joy is a studio session – with arrangement by Jimmy Jones and Oliver Nelson, two talents who again bring out the best in Joe – a groovy and soulful sound that's often not captured as easily on record. Titles on that one include "Sounds Of The Night", "My Last Affair", "Jump For Joy", "It's A Wonderful World", and "You Perfect Stranger".  © 1996-2023, Dusty Groove, Inc.