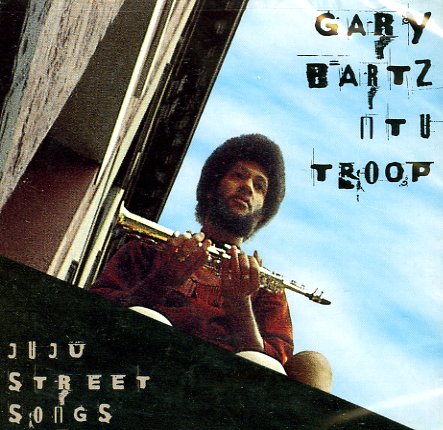 US 2-fer CD that brings together two of Gary Bartz's harder to find LPs on one CD – Juju Street Songs and Follow The Medicine Man. Both LPs feature a lineup that includes Hubert Eaves on electric piano, Stafford James on bass, and Andy Bey on vocals; and the material is pivotal stuff for Gary as he moves from his straight jazz spiritual stuff into a vein that is slightly more electric – but not too electric. Lots of nice funky moments with a righteous vibe, and the track list includes "Dr. Follow's Dance", "Standin' On The Corner", "Sing Me A Song Today", "Black Maybe", "Sifa Zote", and "Africans Unite".  © 1996-2021, Dusty Groove, Inc.
(Out of print.)

Boppin' & Burnin'
Prestige/OJC, 1968. Used
CD...$6.99 (CD...$11.99)
A stone cooker from organist Don Patterson – and one of his best fuller group recordings for Prestige from the 60s! Patterson is best known for his work on the label with his trio that included guitarist Pat Martino and drummer Billy James – and while that unit is intact here, they're ... CD

Soul Battle (with bonus track)
Prestige, 1960. Used
CD...$5.99
This is the kind of battle we like to see! Three heavy tenors – Nelson, King, and Jimmy Forrest – come head to head in a relaxed set of tunes cut in that Prestige blowing session mode, but tweaked with a bit more tightness, in the style of some of the label's emerging soul jazz sides ... CD

Jaws
Prestige/OJC, 1958. Used
CD...$11.99
Bluesy quartet material by Lockjaw, with his combo that featured Shirley Scott on organ and Arthur Edgehill on drums. The tracks are standards, but Davis plays them with a nice deep soulful sound, reaching deeply into his tenor, wrenching out hard-edged notes that drip with a deep rich emotion. ... CD