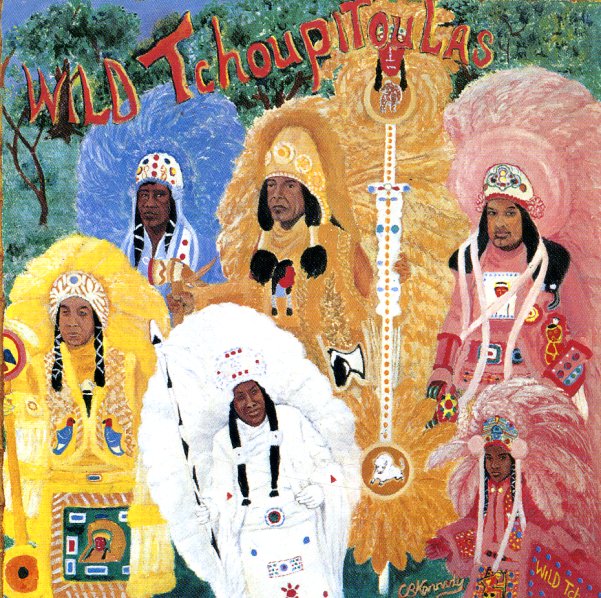 Also available
Wild Tchoupitoulas — Wild Tchoupitoulas ... LP 21.99
A great slice of New Orleans soul from the 70s – a record that replicates the "Indian" culture in the Mardi Gras scene – and which is most notable for featuring work by The Meters as well! The groove here is kind of Meters-styled funk, mixed with some fuller New Orleans mode – as the core Wild Tchoupitoulas group get a nice kick at the core – which makes their lyrics and calls come off even better than in a live setting! The album also gets kickass production from Allen Toussaint and Marshall Sehorn – and is one of the crowning funk jewels in Toussaint's crown for the 70s. Tracks include "Brother John", "Indian Red", "Hey Hey", "Hey Mama", "Meet De Boys On The Battlefront", and a version of "Hey Pocky Way".  © 1996-2022, Dusty Groove, Inc.
(Later pressing on Antilles.)

Into Battle With The Art Of Noise
ZTT/Island, 1983. Near Mint-
LP...$7.99
Fantastic stuff – and still sounding pretty fresh today! This is the first e.p. of tracks from Art of Noise, a groundbreaking set of sound collage tracks that mixes samples, beats, and dada instrumentation into a groove that definitely set the tone for the next 10 years. The record includes ... LP, Vinyl record album

Automatic Man
Island, 1976. Very Good
LP...$6.99
A masterpiece of mid 70s jazz rock – from an obscure combo that features work by fusion legend Todd Cochrane Bayete! Bayete recorded two wonderful albums for Prestige before this set – and although the record has him moving into a much more rock-based style than on his fusion sessions, ... LP, Vinyl record album

Good To Go – Jump To The Beat – Original Motion Picture Soundtrack
Island/TTED, 1986. Near Mint-
LP...$7.99
Soundtrack to the film Good To Go, not specifically about the Go-Go scene in DC, but loosely centered there. Nothing super obscure here, but a nice way to get a bunch of great funky, syncopated Go Go tracks in one place. Includes Trouble Funk "Good To Go", "Still Smokin", 'Drop ... LP, Vinyl record album

So Full Of Love
Philadelphia International, 1978. Very Good+
LP...$8.99
A masterpiece of modern soul that shows The O'Jays working in a style that would become their dominant mode for the next decade – not as upbeat and club-oriented as in the mid 70s years, with a sweet, sophisticated modern soul approach that really let the group grow stylistically. Mellow ... LP, Vinyl record album

Diamond Life
Portrait, 1985. Very Good+ Gatefold
LP...$24.99 (CD...$2.99)
A damn great soul album! Sure, the record was a crossover classic that got played to death back in the 80s – but give it a listen now, and you'll be stunned to hear how fresh it sounds, and how much it reminds you of all the British soul acts that sprung up in the years after it was released. ... LP, Vinyl record album

Aretha In Paris
Atlantic, 1968. Near Mint-
LP...$14.99
Aretha Franklin sings it loud and proud, in front of a classy crowd at the Olympia Theater in Paris – a move that would have made Berry Gordy proud, but which is carried off here in a classic Atlantic mode throughout! Given the tight studio handling of Aretha during these early Atlantic ... LP, Vinyl record album

Lou Rawls Live! (Capitol)
Capitol, 1966. Very Good+
LP...$5.99
One of the greatest albums to ever sum up the genius of Lou Rawls in the 60s – a brilliant live set put together with the talents of David Axelrod! The record perfectly captures the easy-going soul of Rawls in the early years – a natural approach to his music that made him one of the ... LP, Vinyl record album