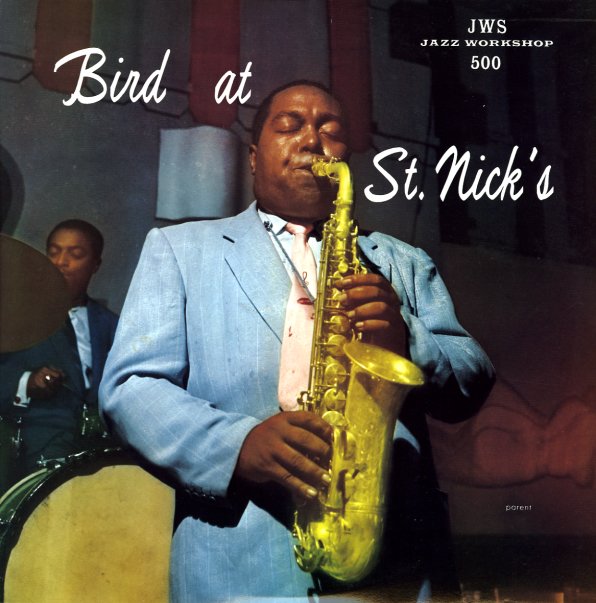 Posthumous issue of an early 50s live set by Charlier Parker – one of the many that were rushed to the public in the years after his early death. The set, like many of the other live ones from the time, isn't recorded that well – but the music is still pretty wonderful. There's a real focus on Bird in the way the microphone was set up – so although you hear the rest of the band comping in the background, the album almost works like a session of solo sax work by Parker – as his alto is right out front in the mix, playing with a faltering style at times – but in a way that only seems to deepen our vision of his genius. Players include Red Rodney on trumpet and Al Haig on piano – and titles include "Ornithology", "Star Eyes", "Visa", "I Didn't Know What Time It Was", and "Confirmation".  © 1996-2020, Dusty Groove, Inc.
(Out of print.)

Bird Returns
Savoy (Japan), Early 50s. Used
CD...$2.99
Pretty great Charlie Parker material – issued by Savoy a number of years after his death, and obtained from obscure sources, with no data on the players on the sessions. The tracks are all nice and long, with plenty of solo space – and the recording quality is pretty good overall, ... CD

Bird At The Roost – The Savoy Years Vol 2
Savoy, 1948/1949. Used
CD...$5.99
Famous radio recordings of the legendary Charlie Parker – captured at the Royal Roost nightclub in the late 40s – blasting out with incredible power over the airwaves in the New York scene! The presentation of the material here includes bits of announcer patter – mostly from ... CD

Complete Verve Master Takes (3CD box set)
Verve, Late 40s/Early 50s. Used 3 CDs
CD...$24.99
A jazz treasure chest – the 73 original recordings by Charlie Parker issued by Verve Records, all packaged in a special box with loads of great extras! The package strips down the Bird sides that have been issued by Verve over the years – going for just the original releases issued in ... CD

Bird On 52nd Street
Jazz Workshop/OJC, 1948. Used
CD...$3.99
One of the more obscure Charlie Parker sessions of the 40s – at least in the original release! The material was recorded in 1948, on a home tape recorder, but not issued until after his death – part of a huge wave of Charlie Parker material that hit the market at the end of the 50s and ... CD

Love, Sex, And The Zodiac
Fantasy/BGP (UK), 1974. Used
CD...$6.99 (CD...$8.99)
A classic from Cannoball and producer-partner David Axelrod – truly great stuff and maybe even better than the Zodiac set Cannonball did for Capitol! The formula is similar to that one – with David Axelrod producing, electric keyboards by Hal Galper and George Duke, spacey solos by ... CD