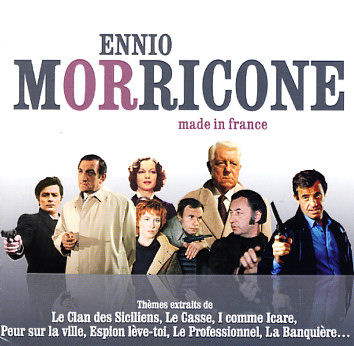 A wonderful look at an under-documented side of Ennio Morricone's career – soundtrack work done for French films of the 70s, some of which aren't nearly as well-known as his Italian classics at the time! Morricone's genius really comes through in this selection of tunes – not just his skills at setting up the charts for an orchestra, but his way of putting together a short piece of music – his amazing ear for sound and space and the way things can fall together with the simplest of elements in the mix. The collection features music from a wide variety of genres – making it one of the most diverse Morricone compilations we've ever stocked – but it's also got a nice sense of pacing and timing too, so that things are never too schizophrenic or off the map! CD features 22 tracks in all – and includes music from the films Sans Mobile Apparent, Peur Sur La Ville, Le Professionnel, Le Ruffian, La Banquiere, Le Trio Infernal, Le Secret, Le Clan Des Siciliens, I Comme Icare, Le Serpent, Le Marginal, and Espion Leve-Toi.  © 1996-2021, Dusty Groove, Inc.