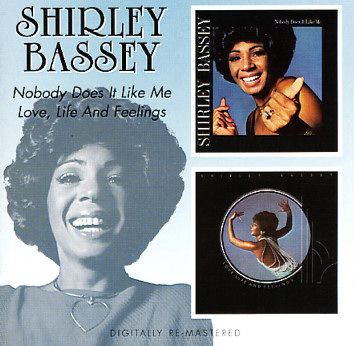 2 mid 70s albums from Shirley Bassey – back to back as a 2CD set! Nobody Does It Like Me has shirley working in New York with arrangements by Gene Page and Nick Perito – both of whom give Shirley a sound that's smooth, sophisticated, and sometimes soulful – yet still filled with some of the powerful punch of her earlier British recordings. There's almost echoes of mid 70s Marlena Shaw or Nancy Wilson at times – although the overall feel is a bit more pop in the end. Titles include "Leave A Little Room", "When you Smile", "Davy", "All That Love Went To Waste", "I'm Nothing Without You", and "You Are The Sunshine Of My Life". Love Life & Feelings is a serious British session arranged and conducted by Arthur Greenslade – done in a mood that's often mellow, and which has more dark corners than we'd expect from Shirley – a sad-tinged sound that often features a bit of organ brewing down in the low range of the sound spectrum. Bassey's vocals are surprisingly well suited to the setting, and there's a restraint here that really helps her take one of her best new steps in years – one that's perhaps a bit too late in her career to really make a difference, but which would have really done wonders at the start of the 70s! Titles include "Alone Again Naturally", "Midnight Blue", "Isn't It A Shame", "What I Did For Love", "Born To Lose", "The Hungry Years", "The Way I Want To Touch You", and "You've Made Me So Very Happy".  © 1996-2020, Dusty Groove, Inc.