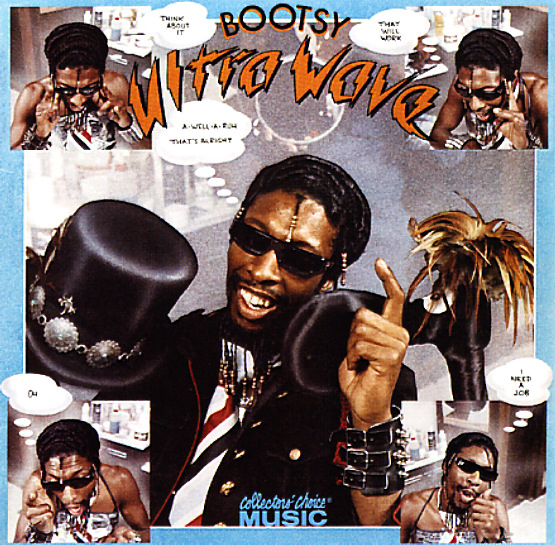 Bootsy's tightening things up a bit from before, but still sounding plenty darn great – that classic Collins groove in all its P-Funk glory! All the best elements are certainly in place – production by George Clinton and Bootsy, horn arrangements by Fred Wesley, and the slinky soulful sound that made Bootsy's albums some of the most enduring of the P-Funk posse. The album shows a bit of the transformation in soul bass playing that Bootsy helped to foster during the late 70s – but it's still not as "whompin" as some of the many groups that were springing up in his wake – a good thing, to us, because so many of Bootsy's imitators had a way of playing their bass way too much! Titles include "Mug Push", "Is That My Song", "It's A Musical", "Sound Crack", and "Fat Cat".  © 1996-2022, Dusty Groove, Inc.
(Includes the printed inner sleeve. Cover has a cutout notch and light wear.)

Ahh...The Name Is Bootsy, Baby!
Warner, 1977. Very Good Gatefold
LP...$17.99
Massive work from Bootsy Collins – one of his best-ever solo albums, and a perfect summation of the P-Funk groove – focused strongly through Bootsy's own sense of stardom! George Clinton worked with Collins on production, and the album's as tight as the best Parliament or Funkadelic ... LP, Vinyl record album

Purple Rain
Warner, 1984. Near Mint-
LP...$39.99 (LP...$25.99)
One of the greatest crossover albums of the 80s – and the record that catapulted Prince very firmly into the mainstream! There's a tightness here that surpasses even that of Prince's early classics for Warner Brothers – an unabashed love of a pop hook that makes for some incredibly ... LP, Vinyl record album

We Got By
Warner, 1975. Very Good+
LP...$4.99
Al's first major label record – cut when he was an emerging soul jazz vocalist, but before he'd gone totally over the top in super-slick hit mode. The album's got a good 70s LA jazzy backing, with guests like Dave Grusin, Arthur Adams, and Larry Bunker keeping the music moving at a nice pace. ... LP, Vinyl record album

Glow Of Love
Warner, 1980. Very Good+
LP...$14.99
The classic debut from Change – and the start of an amazing run of groovers in the early 80s! The set's got a tight, jazzy feel throughout – a stripped-down approach to disco modes, with the same focus on the basslines that you'd find in work by Chic – but a style that's almost ... LP, Vinyl record album

Urban Renewal
Warner, 1974. Very Good
LP...$13.99
One of the best early albums from Tower Of Power – with kind of a funky choppy groove that feels like a San Francisco version of the Watts 103rd Street Rhythm Band, riffing away in a stoner funk mode that always sounds like it might go off slightly, but which always wobbles back on course. ... LP, Vinyl record album

1999
Warner, 1982. Near Mint- 2LP
LP...$54.99
The record that forever put Prince on the map – a legendary set that took him from being an under-appreciated soul singer to a lasting pop music legend! Prince had been around for a few years before 1999 – but the double-length set was the first to really win over the masses to his ... LP, Vinyl record album