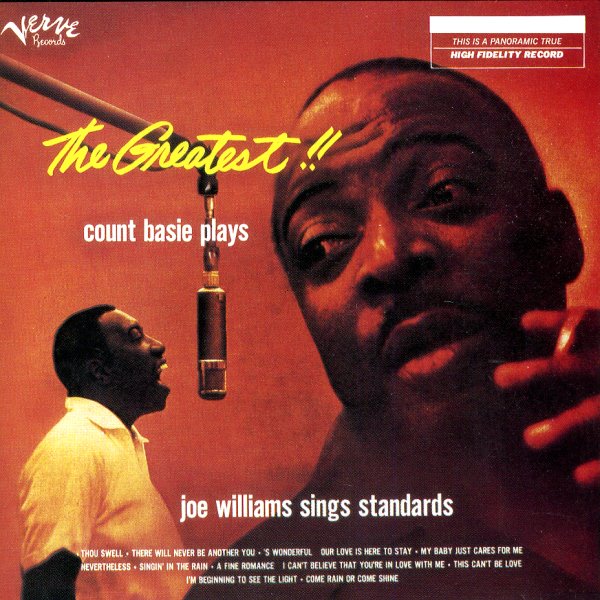 An excellent album of vocals by the great Joe Williams! Joe's always been a fine singer, but with Basie, he really gets the backing he needs to do his work the best. And although this album isn't as authenico as it might be, it still comes from a time when Verve really knew how to handle singers well. Titles include "Our Love Is Here To Stay", "A Fine Romance", "This Can't Be Love", "Come Rain Or Come Shine", and "There Will Never Be Another You".  © 1996-2021, Dusty Groove, Inc.
(Black label Verve Inc pressing with deep groove. Cover has some gloss peel on the edges and light aging on the back.)

Presenting Joe Williams And Thad Jones Mel Lewis (purple cover)
Solid State, 1968. Very Good Gatefold
LP...$9.99
A funky big band album, recorded by Thad Jones & Mel Lewis, with the great Joe Williams on vocals! The record is one of the most sought-after by the team – probably because it includes the hard breakbeat version of "Get Out of My Life Woman" that's been sampled often over the ... LP, Vinyl record album

Presenting Joe Williams And Thad Jones Mel Lewis
Solid State, 1968. Very Good Gatefold
LP...$14.99
A funky big band album, recorded by Thad Jones & Mel Lewis, with the great Joe Williams on vocals! The record is one of the most sought-after by the team – probably because it includes the hard breakbeat version of "Get Out of My Life Woman". The other tracks are pretty funky, ... LP, Vinyl record album