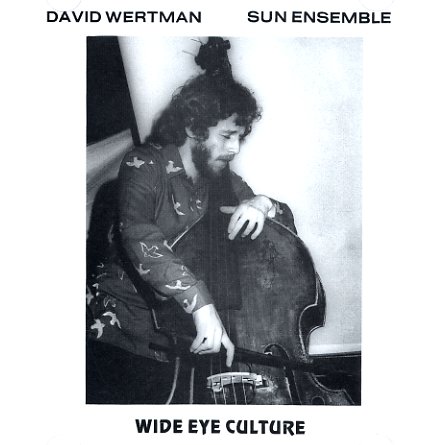 Also available
David Wertman Sun Ensemble — Wide Eye Culture (3LP set – with bonus tracks) ... LP 39.99
Really beautiful sounds from bassist David Wertman – an unsung hero of the late 70s spiritual jazz scene around New England, and one who delivers this gem in close partnership with singer Lynne Meryl! Meryl's got this warm, fluid style that's a lot like the way that some of the better Bay Area groups were using jazz vocals a few years before – a mode inspired by overseas singers like Flora Purim or Urzula Dudziak, but used here alongside soulful instrumentation that draws a lot from the more inside currents of the loft jazz scene! Wertman's bass is at the core, and tremendous throughout – full of fire and force, and sometimes matched with a bit of percussion – a musical force that's handled here more fully by Tony Vacca, who employs a range of instruments – next to piano and prepared piano from Tom McClung, and these strong trombone solos from Tim Atherton – a player who really sends the whole thing over the top with his contributions! Most tracks have a great modal groove – and titles include "Forest Dance", "Camel", "Flute Song", "New Earth", "Sing My Love Song", and "Dance Of The Mideast Madness". This expanded edition brings in more rare cuts from other releases – eight bonus tracks that include "How Come", "Up In The Sky", "Sci Fi Fantasy", "Blessing Of Love", "Golden Light", and "You Are My Love".  © 1996-2022, Dusty Groove, Inc.