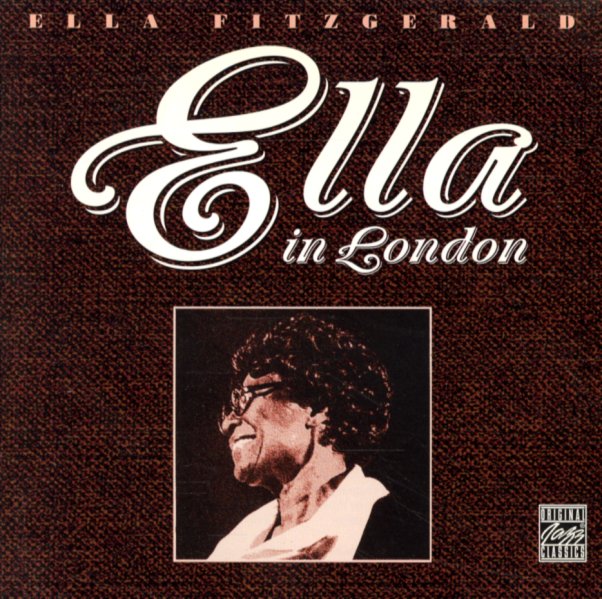 Something groovy always happens to Ella Fitzgerald in London – and in the 60s and 70s, the city became home to some of her best post-Verve recordings! This date's a compelling live performance recorded at Ronnie Scotts in 1974 – with backing by a quartet that includes Tommy Flanagan on piano and Joe Pass on guitar – gently grooving behind Ella in a setting that's one of the most relaxed live dates we've ever heard her do. Some of the tunes feature a bit of patter on the introductions – showing the Fitzgerald charm that extended way beyond singing – and titles include "The Man I Love", "Everytime We Say Goodbye", "They Can't Take That Away From Me", "You've Got A Friend", "Happy Blues", and "Lemon Drop".  © 1996-2023, Dusty Groove, Inc.

Ella In London (Japanese paper sleeve edition)
Pablo (Japan), 1974. Used
CD...$14.99 19.99
Something groovy always happens to Ella Fitzgerald in London – and in the 60s and 70s, the city became home to some of her best post-Verve recordings! This date's a compelling live performance recorded at Ronnie Scotts in 1974 – with backing by a quartet that includes Tommy Flanagan on ... CD

Complete Ella In Berlin – Mack The Knife (with bonus tracks)
Verve, Early 60s. Used
CD...$3.99
Quite a popular live album from Ella – recorded in Berlin at the height of the cold war years – featuring a famous recording of "Mack The Knife" that almost blew away Bobby Darin's hit with the cut! The album's nicely free of some of the stodginess of some of Ella's Songbook ... CD

So Warm
Prestige/OJC, 1961. Used
CD...$5.99
Etta Jones is definitely nice and warm here – working with some great backings from Oliver Nelson, who mixes in a bit of strings with the usual jazzy punch he was delivering at the time! Jones' vocals are at the height of her early powers here – working with poise, class, and a heck of ... CD