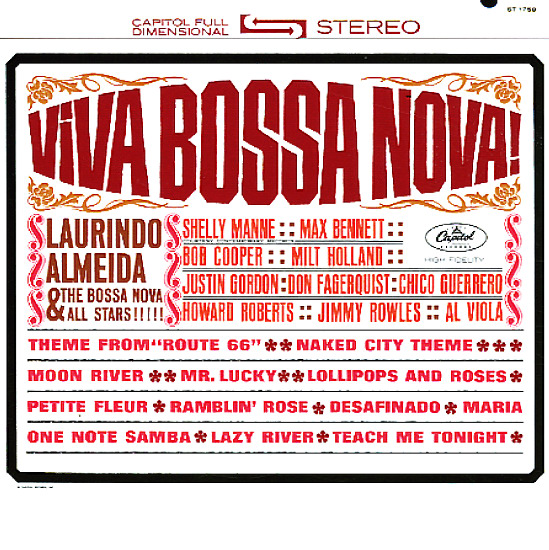 A sweet little album from Laurindo Almeida and his "Bossa Nova All Stars" – not a group of Brazilian musicians, and instead a hip set of LA players who really help make the set sparkle! There's a bit more jazz here than on some of Laurindo's other Capitol records of the time – a great 60s update to the groove he first forged in the 50s with Bud Shank – featuring even more swinging rhythms, inventive instrumentation, and a slightly larger group with players who include Jimmy Rowles on organ, Howard Roberts on guitar, Bob Cooper on tenor, Don Fagerquist on trumpet, Justin Gordon on flute, and Shelly Manne, Chico Guerrero, and Milt Holland on percussion! The use of organ is especially nice – a warm wave of sound on top of some great bossa rhythms – and titles include "Naked City Theme", "Teach Me Tonight", "Desafinado", "Mr Lucky", "Theme From Route 66", and "One Note Samba".  © 1996-2021, Dusty Groove, Inc.