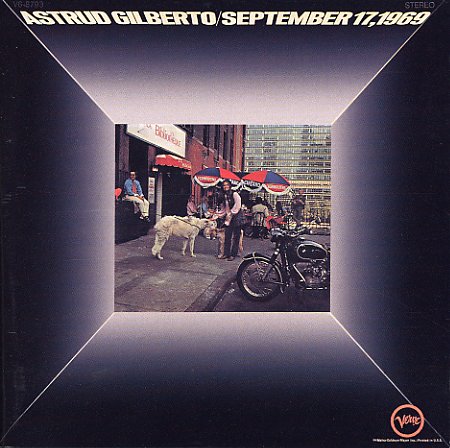 One of the grooviest records ever from the lovely Astrud Gilberto – a session that beautifully mixes her usual bossa nova with bits of Sunshine Pop and other hip late 60s grooves – all in a mode that really takes off a lot more than other Gilberto albums on Verve! The style here is really wonderful – upbeat, soaring, and joyous on most of the best numbers – a real transformation of Astrud's usual groove, and a great departure from too familiar bossa nova material. The record's been a little bit lost to the shifting sands of time – possibly because it's not as iconic as it might be – but we totally love it, and really consider it one of Gilberto's best moments ever in the studio. Arrangements are by Albert Gorgoni – and titles include a fantastic long jamming version of the track "Beginnings" that sounds completely different from the Chicago hit, and which is a stunning dancefloor groover! The album also includes an English version of "Canto De Osshana" called "Let's Go", plus a groovy uptempo version of the Bee Gee's "Holiday", and the great cut "Love Is Stronger Than We" from the soundtrack to A Man & A Woman. Other tracks include "Think Of Rain", "A Million Miles Away Behind The Door", "Don't Leave Me Baby", and "Summer Sweet (part 1, part 2 to be continued)".  © 1996-2022, Dusty Groove, Inc.

Rio Revisited
Verve (Japan), 1987. New Copy
CD...$9.99 (CD...$4.99)
An overlooked bit of mid 80s bossa – a live set that features Antonio Carlos Jobim on piano and vocals, plus some great additional help from Gal Costa! The work here is a nice maturation of older bossa modes – slightly darker than before, and with a rich feeling that represents the ... CD