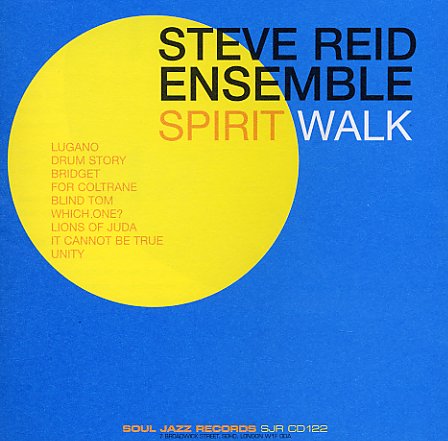 Drummer Steve Reid made some fantastic records back in the 70s – indie label spiritual jazz sessions that went on to become the stuff of legend over the decades – so much so, Reid was able to return to the forefront with this amazing new record in the 21st Century! The set is something of a partnership with Kieran Hebden, who was then of Fourtet, but maybe reached equal fame through his work with Reid – mixing electronics with Steve's drums and percussion – in a very cool ensemble that also features Nathaniel Catchpole and Neil Kleiner on tenor saxes, Chuck Henderson on soprano, Tony Bevan on bass sax, Boris Netsvetaev on keyboards, and John Edwards on bass. The sound is amazing – really a precursor to both the new modes that would emerge on the London scene in the following decade, and the rebirth of spiritual jazz around the same time – on titles that include "Lugano", "Drum Story", "Bridget", "For Coltrane", "Blind Tom", "Which One", "Lions Of Juda", "It Cannot Be True", and "Unity".  © 1996-2021, Dusty Groove, Inc.
(Limited edition – with download! Features original inner, with Gilles Peterson interview.)

Washington Suite (red vinyl pressing)
Asha/Soul Jazz (UK), 1970. New Copy (reissue)
LP...$36.99 40.99
One of the most beautiful albums ever recorded by DC flutist Lloyd McNeil – and one of the grooviest, too! Lloyd's work is always amazing – stretched-out, spiritual, and filled with life – but this time around, there's a definite groove to the record that's undeniable – an ... LP, Vinyl record album

Tori
Baobab/Soul Jazz (UK), 1978. New Copy (reissue)
LP...$34.99 39.99
A beautiful album of spiritual jazz flute tracks – one of the few self-released classics by the legendary Lloyd McNeill, a player who's never really gotten his due! The album's got a warm soulful sparkle that brings together Latin and Brazilian touches with McNeill's own lyrical style – ... LP, Vinyl record album