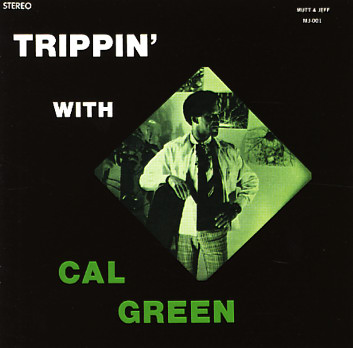 The back cover of this one says "This Album Should Be Titled MONSTER" – and for once, the back cover is right! The album's the only one we've ever seen by the super-dope LA guitarist Cal Green – a wonderful talent with a hard-edge approach to the strings, one that's a bit like that of George Freeman, but a bit more laidback and spaced out. You might know Green from his work on albums by organist Charles Kynard – and Kynard joins Green here in a sweet little quartet session with some very funky moments. The album's got a killer original called "Trippin" which has some super-wonderful work on guitar – and it's also got some surprisingly great covers of "Days Of Wine & Roses" and "My Cherie Amour", taken with the chromatic wandering style of Eddie Fisher. Other highlights are the originals "Sieda", and "Mellow In Blue", plus the slightly offbeat "Johnny's Gone To Vietnam". A monster – indeed!  © 1996-2022, Dusty Groove, Inc.