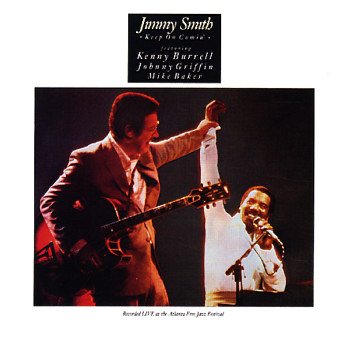 A great back to basics session from organist Jimmy Smith – recorded live in the early 80s, but with a freewheeling small combo sound that takes us back to his Blue Note years! The group on the album's a quartet – with Jimmy on both piano and organ, Kenny Burrell on guitar, and Johnny Griffin on drums – and the tracks are long and open-ended, with plenty of solo space for all players – especially Burrell, whose warmly-colored lines really help shape the sound of the record. Titles include "No Problem", "Keep On Comin", "Callitwhachawanna", and "Be Yourself" – as well as a short piano solo medley from Jimmy!  © 1996-2022, Dusty Groove, Inc.