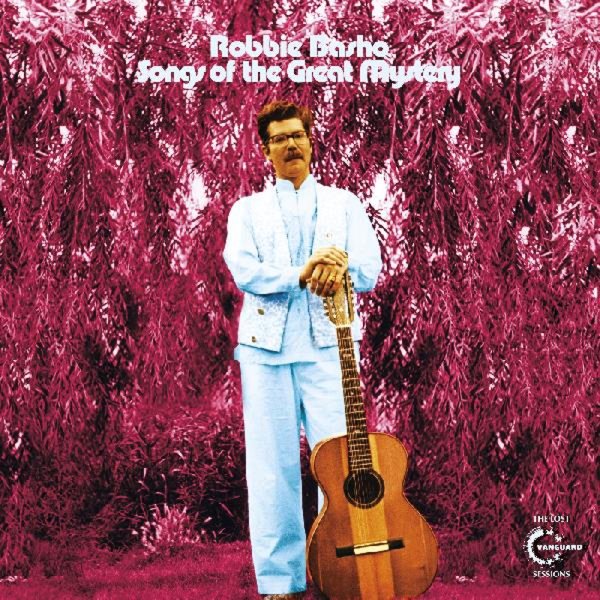 Songs Of The Great Mystery – The Lost Vanguard Sessions

A never-issued album from the guitar genius Robbie Basho – material recorded at the same Vanguard Records sessions that produced his monumental albums Voice Of The Eagle and Zarthus, and every bit as great as the work that appeared on those records – and as the tracks on Basho's Takoma Records albums from the 60s! The set features Robbie doing a bit of his unusual vocalizations, but in a way that's folded in very strongly with his unusual phrasings on acoustic guitar – although with Basho maybe hitting a more familiar folk style at some moments, even though the lyrics are all his own, and have a mystical quality that really matches his work on guitar. There's a really haunting quality to the whole record, and the vocal tunes could easily have Basho right up there with left-field contemporaries, like Fred Neil on Capitol, or Tim Hardin on his early Columbia years – but, mixed with the longform guitar explorations, create a vibe that's completely Robbie's own. Titles include "A Day In The Life Of Lemuria", which is an unusual piano/whistling tune – plus "The Butterfly Of Wonder", "Thunder Sun", "Song Of The Great Mystery", "Thunder Love", "Death Song", "Night Way", and "Katerei Tekakwitha".  © 1996-2021, Dusty Groove, Inc.

Red Headed Stranger (remastered edition)
Columbia/Legacy, 1975. New Copy
CD...$4.99 6.99
Willie's finest hour! The Nashville establishment was as horrid in the 70s as it is today, with glitzy, soulless, committee-thought pop garbage ruling the scene – so Willie, who had ironically been a hit songwriter for a decade packed it up for Austin and churned out the spare, haunting and ... CD