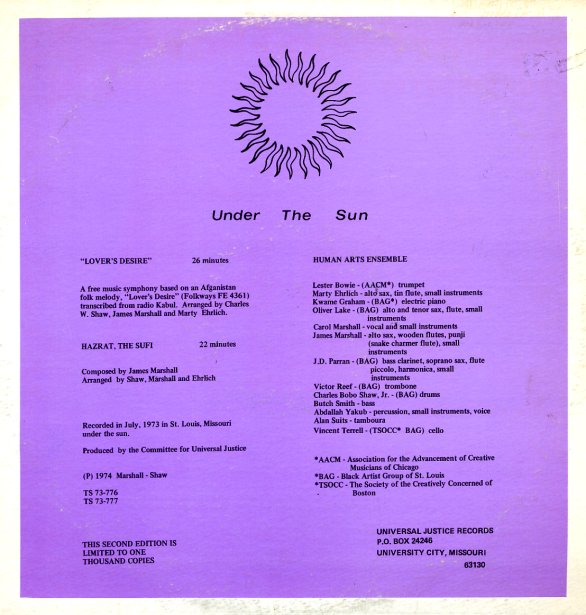 Chicago had the Art Ensemble of Chicago at the end of the 60s – and St Louis had the fantastic Human Arts Ensemble at the start of the 70s – a wonderfully creative jazz group who shared a lot of the same ideas of improvisation and artistic freedom as the AACM up in the Windy City! This album's maybe that group's lasting legacy – a fantastic record that's sometimes as funky as it is spiritual, as outside as it is tied to older jazz traditions – performed by a core lineup that includes Oliver Lake on alto and tenor, Lester Bowie on trumpet, Marty Erlich on alto and flute, James Marshall and JD Parran on additional reeds, Charles Bobo Shaw on drums, and Carol Marshall on vocals and small instruments! The group have a very special vibe – one that comes through especially strong on the side-long "Lover's Desire" – a nice slightly-funky number that has a groove that's sort of modal. Side two of the album features "Hazrat The Sufi", a long creative avant piece, with insane ensemble playing that's very much in the AACM mode – but with some touches that also point the way towards the later loft jazz scene in New York – especially the world in which Lake would become such a key participant.  © 1996-2021, Dusty Groove, Inc.
(A fantastic package – done with the pasted-on image of the original numbered LP pressing – right down to a pasted-on envelope on the back!)