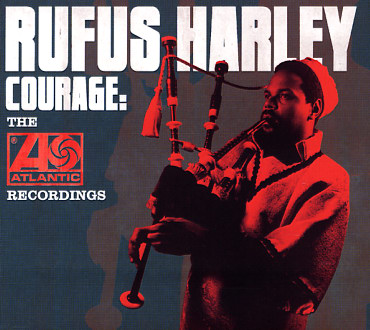 A treasure trove of music from one of the hippest jazz players ever – the legendary Rufus Harley, a saxophonist by trade, but one who could also play the bagpipes as well! Harley had a really unique way of using the bagpipes as a free-flowing modal soloing instrument – one that's clearly influenced by the best work of John Coltrane in the early 60s, and which really takes the instrument back to its original pre-Scottish roots in Africa! This wonderful set brings together 4 of Harley's best albums ever – Bagpipe Blues, Tribute To Courage, Kings/Queens, and Scotch & Soul – all gems recorded for Atlantic Records in the 60s, and which are presented here with 2 bonus tracks as well! Harley plays both bagpipes and saxophone on the record – the latter in a way that's equally compelling as the former – and the 2CD set features a whopping 28 tracks in all, supported by liner notes and other details. Titles include "Ali", "Where Have All The Flowers Gone", "Pipin The Blues", "Sufur", "Scotch & Soul", "Feeling Good", "Taurus The 20th", "Bagpipe Blues", "Kerry Dancers", "More", "Sunny", "A Tribute To Courage", "About Trane", "Eight Miles High", and "Love Is Blue".  © 1996-2023, Dusty Groove, Inc.

My Favorite Things (2CD edition – mono/stereo mixes)
Atlantic, 1961. New Copy 2CD
CD...$23.99 24.99 (LP...$99.99)
Wonderful wonderful wonderful work from the legendary John Coltrane – and even though it's probably one of his best-selling albums of all time, it's still a treasure – and has an essential place in just about any jazz collection! We've heard the original title version of "My ... CD