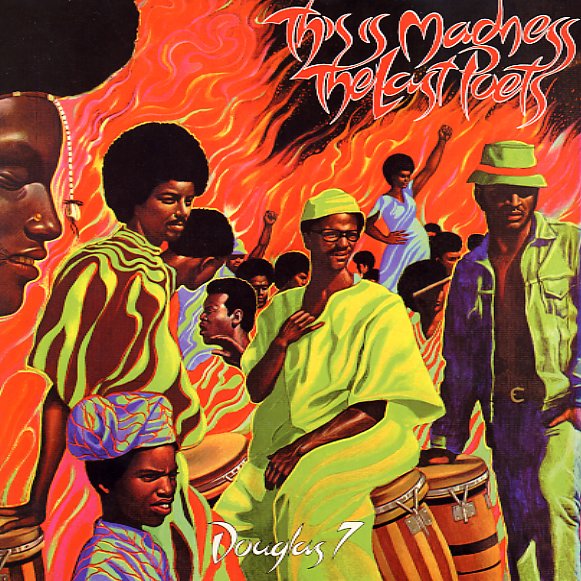 One of the Last Poets greatest albums – and one of their most sophisticated as well! Gone are the rough-hewn rhymes of the group's first album, and in their place are better arranged, more thought-out tracks that mix in a wealth of musical influences – and which expand the group's verbal expression past simple protests, and into the realm of Jazzoetry that became their trademark during the mid 70s. Tracks include "Related to What", "Black Is", "White Man's Got a God Complex", "Black People What Y'All Gonna Do", and "This is Madness" – and a number of tracks are preceded by strong and forceful chants before the lyrics kick in!  © 1996-2022, Dusty Groove, Inc.
(Red label Douglas pressing. Cover has surface & spine wear, name in pen on both sides. Labels have name in pen. Includes the red inner sleeve.)

Last Poets (Douglas pressing)
Douglas, 1970. Very Good- Gatefold
LP...$9.99
The first album by the second group to call themselves the Last Poets – and as fierce a document of their rich talents as you'll ever find – bursting forth with anger and righteousness at a level as tight as Gil Scott-Heron's first album! The group here is the key second lineup of the ... LP, Vinyl record album