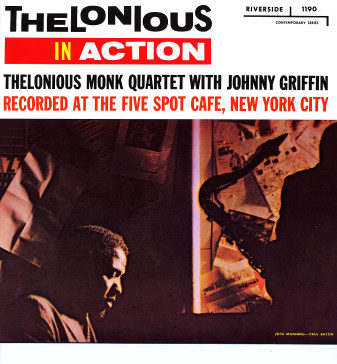 Thelonious In Action (with bonus tracks)

A classic cooker from Thelonious Monk – recorded during his legendary run at the Five Spot in the late 50s, and featuring some especially great work on tenor from a young Johnny Griffin! Griffin's filling a role here that would be cemented a bit more firmly in the 60s by Charlie Rouse – but what we like about his playing here is that it's not as clearly codified "Monkish" as some of Rouse's work (even though that's all pretty darn great) – sometimes a bit more open, although still filled with angular tones and changes on this set of all-original compositions by Monk. Rhythm is by Ahmed Abdul-Malik on bass and Roy Haynes on drums – and titles include "Evidence", "Epistrophy", "Blue Monk", "Rhythm-a-ning", "Light Blue", and "Coming on the Hudson". CD features 3 bonus tracks too – "Unidentified Solo Piano", "Blues Five Spot", and "In Walked Bud/Epistrophy".  © 1996-2023, Dusty Groove, Inc.
(OJC pressing.)