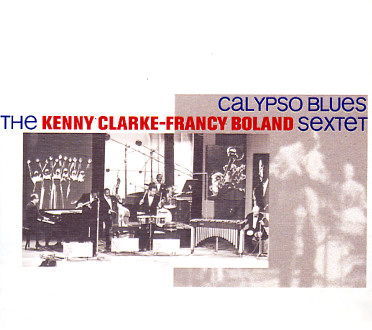 Rare tracks by the Clarke-Boland Sextet – a small group offshoot of the funky Big Band that was led by Kenny Clarke and Francy Boland – and which featured some of the key soloists in the group! The lineup here includes Sahib Shihab on flute, Fats Sadi on vibes and bongos, Joe Harris on percussion, and Jimmy Woode on bass – plus Clarke and Boland on drums and piano, respectively – a wonderful group that has an incredible sense of rhythm, and comes up with loads of wonderful modal numbers throughout! The vibe is wonderful – and the collection's a great look at this unusual combo – filled with fire and soul – and proof that in the jazz world, at least, great things can happen when global boundaries are crossed. Titles include "Con Alma", "Invitation", "Sconsolato", "Lilemor", "Just Give Me Time", "Love Hungry", "Ensadinado", and "Man From Potter's Crossing".  © 1996-2023, Dusty Groove, Inc.
(Out of print, includes slipcase.)

Complete Live Recordings At Ronnie Scott's – Volcano/Rue Chaptal
MPS/Rearward (Italy), 1969. Used
CD...$14.99
A large group in a small club – the legendary Clarke Boland Big Band, playing at the home turf of one of their key members – tenorist Ronnie Scott! The set features a very legendary performance by the ensemble – a crack lineup that's easily one of the best ever sported by the ... CD