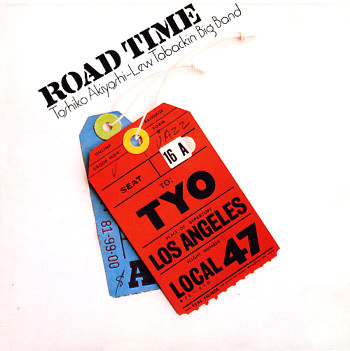 A great little live set from the glory days of the Toshiko Akiyoshi/Lew Tabackin Big Band – a series of performances from Japan, recorded in 1976, all featuring the ensemble at its best! The double-length nature of the record takes the group even farther than usual – really letting them stretch out with the kind of bold tones and broad colors that made the group so great. Soloists include Bobby Shew on trumpet, Jimmy Knepper on trombone, and Gary Foster on alto sax – alongside leaders Lew Tabackin on tenor and flute, and Toshiko Akioshi on piano. Titles include a nicely dancing reading of the classic "Warning: Success May Be Hazardous To Your Health" – plus "Kogun", "Henpecked Old Man", "Tuning Up", "Since Perry/Yet Another Tear", and "Soliloquy".  © 1996-2022, Dusty Groove, Inc.
(Cover has minimal wear.)

Michel Legrand Recorded Live At Jimmy's
RCA, 1975. Sealed
LP...$5.99 7.99
One of a few key efforts done by Michel Legrand for RCA in the 70s – sessions that stand out as some of his best jazz work from the decade, and which present Legrand in unfettered brilliance, both as a player and arranger! This live date still has the original compositions and sense of ... LP, Vinyl record album