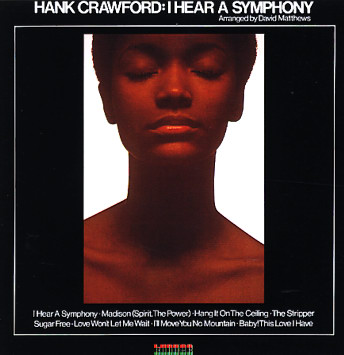 Not really a symphony, but a great album that features the soulful alto sax of Hank Crawford blowing over some rich larger backings from David Matthews – all with a sweetly funky Kudu sound! The style's a bit more polished than some of the other Kudu sessions of the time – almost a bit disco or clubby at times – as Matthews brings in a fair bit of strings and horns to the backings, and also has some female backing singers sweetening up the sound. But as usual with Kudu, the record's no cheap cash-in sort of set – and Matthews ensures that it's got a tightly-crafted groove that's almost like mainstream 70s soundtrack funk at its best moments. Keyboards are by Richard Tee and Leon Pendarvis – and titles include "Sugar Free", "I Hear A Symphony", "The Stripper", "Hang It On The Ceiling", and "Love Won't Let Me Wait".  © 1996-2021, Dusty Groove, Inc.
(Cover has light wear and a bent corner.)