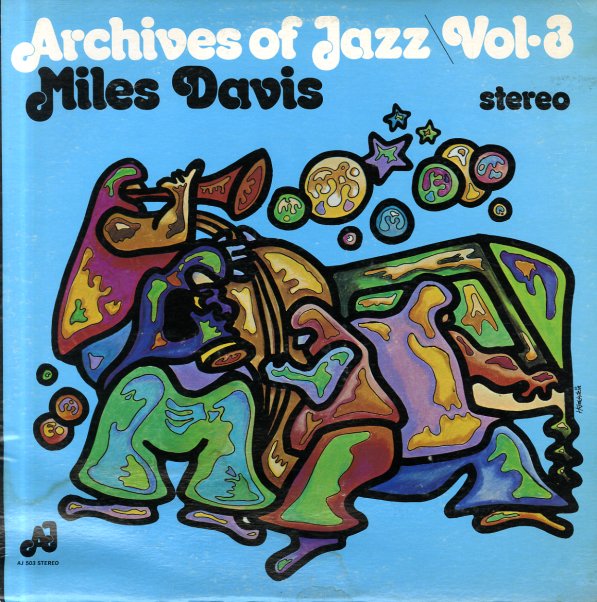 Archives Of Jazz Vol 3 (aka Many Miles Of Davis)

Early bop sides, not led by Miles as you might imagine from this package, but featuring him. We're not entirely certain of the origin of these recordings, but they are at least contemporaneous with the Savoy sides Miles was cutting with Bird, and according to the notes, feature Charlie Parker, Lucky Thompson, Duke Jordan, Max Roach and others. 10 tracks in all: "Out Of Nowhere", "A Night In Tunisia", "Yardbird Suite", "Ornithology", "Moose The Mooch", "Embraceable You", "Bird Of Paradise", "My Old Flame", "Don't Blame Me" and "Scrapple From The Apple".  © 1996-2021, Dusty Groove, Inc.
(Early 70s issue.)

My Old Flame
Up Front, 1960s. Near Mint-
LP...$11.99
Early bop sides, not led by Miles as you might imagine from this package, but featuring him. We're not entirely certain of the origin of these recordings, but they are at least contemporaneous with the Savoy sides Miles was cutting with Bird, and according to the notes, feature Charlie Parker, ... LP, Vinyl record album

Tribute To Jack Johnson
Columbia, 1971. Very Good+
LP...$34.99
A masterful tribute from one bad cat to another – and easily one of Miles Davis' greatest electric albums ever! The album's got a powerful, epic sort of feel – a renewed focus after the looser style of Bitches Brew, and the 70s live albums – and one that mixes a deeper funky ... LP, Vinyl record album