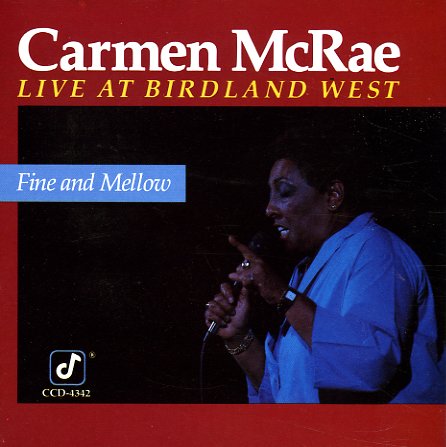 Also available
Carmen McRae — Fine & Mellow – Live At Birdland West ... CD 5.99
A mighty nice setting for Carmen McRae, and a bit different than usual too – especially given that the backing group is a pretty soulful tenor/organ combo! Jack McDuff handles the Hammond, and Red Holloway plays both tenor and alto, with some nice comping from Phil Upchurch on guitar in the group – and this mix of hip players gives the set a more soulful swing than some other McRae dates from the time – and from other times as well – almost going for the feel of some of the 60s Etta Jones sets on Prestige. Titles include "Black & Blue", "My Handy Man Ain't Handy No More", "Fine & Mellow", "What Is This Thing Called Love", "What Can I Say After I Say I'm Sorry", and "One More Chance".  © 1996-2023, Dusty Groove, Inc.
(Cover has light surface and edge wear.)

Invitation
Official (Denmark), Late 50s. Very Good+
LP...$4.99
(Cover has light waviness and a trace of a stain on the back - due to moisture.) LP, Vinyl record album

Sweet Baby Blues
Concord, 1984. Very Good
LP...$0.99
A sweetly stepping session of bluesy jazz vocals from Jeannie Cheatham – outwardly a trad-oriented record, but done here with some nice light west coast touches that really capture the best of the Concord groove of the early 80s. There's a gentle swing to the tracks that reminds us of some ... LP, Vinyl record album