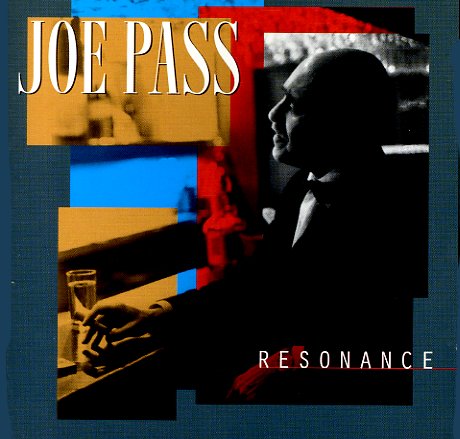 Trio material, recorded live at Dantes – Joe Pass on guitar with Jim Hughart on bass and Frank Severino on drums!  © 1996-2022, Dusty Groove, Inc.
(Out of print, punch through barcode.)

Joe Pass At The Montreux Jazz Festival 1975
Pablo/OJC, 1975. Used
CD...$9.99
The guitar of Joe Pass was one of the best-recorded instruments by Pablo Records in the 70s – as you'll hear on this wonderful live date from the label! Pass was a player who first rose to fame in the 60s, but wasn't always recorded that well – but in the 70s, Pablo sides like this ... CD

Basie Big Band (20 bit remaster)
Pablo, 1975. Used
CD...$9.99 (CD...$14.99)
The Basie band is plenty big here – but never too much so to lose their confident swing of earlier years! The Count is still firmly at the helm at the time of this recording – leading and playing keys with that spacious, stepping quality that makes a Basie number of the later years ... CD

Concepts In Blue
Pablo, 1981. Used
CD...$6.99
A slightly larger group, which gives Johnson a chance to show off his arranging skills – but a set that also leaves plenty of room for solos too! Features JJ Johnson on trombone, Clark Terry on trumpet, Ernie Watts on tenor and alto, and Pete Jolly and Billy Childs on keyboards! CD

Lester Young In Washington DC 1956 Vol 5
Pablo, 1956. Used
CD...$6.99
A lost treasure from Lester Young – previously unreleased live material from the 50s, recorded in a style that's a fair bit different than some of his studio work of the decade! The set took place at the Patio Lounge in Washington, DC – and was recorded by Bill Potts, who is also the ... CD