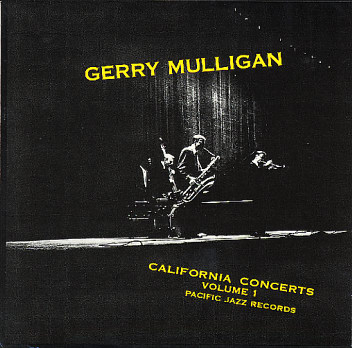 A classic live album by Gerry – featuring one set of tracks recorded in Stockton, CA in 1954, with Chico Hamilton, Red Mitchell, and Jon Eardley; and another recorded in San Diego the same year, with Zoot Sims, Bob Brookmeyer, Larry Bunker, Red Mitchell, and Eardley. Gerry even plays a bit on the piano, despite its absence from his other work – and titles include "Western Reunion", "Little Girl Blue", "Blues Going Up", and "The Red Door".  © 1996-2021, Dusty Groove, Inc.
(Black label World Pacific pressing, with deep groove. Cover has split top and bottom seams.)

Mainstream Of Jazz
EmArcy, 1956. Very Good+
LP...$14.99
Gerry Mulligan's still far from the mainstream of jazz on this sweet little set – a great date that expands nicely from the mellower styles of the Pacific Jazz years – expanding the group a bit, with some really great results! In addition to Mulligan's usual baritone sax, Gerry also ... LP, Vinyl record album

Jazz Combo From I Want To Live!
United Artists, 1958. Near Mint-
LP...$11.99
This is the small combo recording of tracks from the legendary jazz score to I Want To Live! Although not featured that prominently in the film, the band of Gerry Mulligan, Art Farmer, Bud Shank, and others were a pretty tight little group – even though it was strange to see this west coast ... LP, Vinyl record album