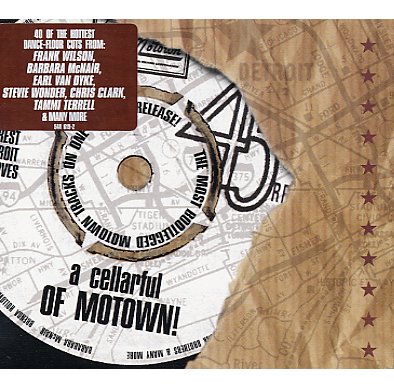 Way more than just a "cellarful" of Motown – a wealth of great tracks, all of which are previously unreleased! This incredible 2CD set is a landmark in the history of both Motown and Northern Soul – as it brings together 40 tracks that were recorded in the glory days of the Detroit scene, but never issued at the time. A number of cuts on the set have risen to fame over the years as bootlegs floating around the UK club scene, and they're issued properly here for the first time ever, along side other lost gems that will soon become new classics to a generation of soul fans – all wrapped up in one great package filled with notes on the music, and listing the origins of the tunes! Titles include "My Sugar Baby" by Frank Wilson, "Baby A Go Go" by Barbara McNair, "How Can I" by Brenda Holloway, "He Was Really Sayin Somethin" by Earl Van Dyke, "Until You Came Along" by Carolyn Crawford, "Before It's Over" by Sammy Ward, "Long Gone Lover" by Velvelettes, "If You Ever Get Your Hands On Me" by Gladys Knight & The Pips, "Lucky Lucky Me" by Jimmy Ruffin, "I Wish I Liked You" by Marvin Gaye, "You Made Me Feel Like" by Syreeta, "Don't Let Me Down" by Kim Weston, "Don't Put Off Till Tomorrow What You Can Do Today" by The Monitors, and "It Must Be Love Baby" by Chuck Jackson & Yvonne Fair. Lots lots more, and filled with wonderful tunes!  © 1996-2021, Dusty Groove, Inc.

Hotter Than July
Motown/Universal, 1980. Used
CD...$4.99 (LP...$29.99)
A bit smoother than early days, but still very nice and soulful – and did we expect any less from Stevie? The record's got a nicely flanged-out soul groove – with a style that kind of expands on the vocal and keyboard production of the early 70s, taking the groove towards a sound that ... CD