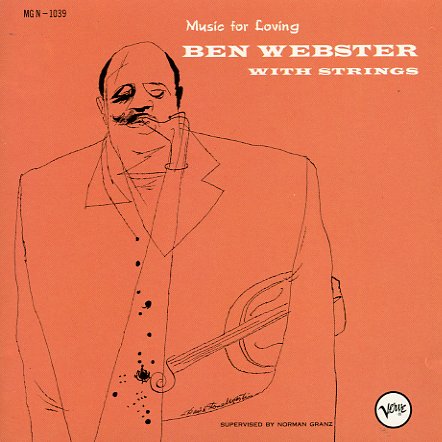 Wonderful stuff! Ben Webster blows soulful late night ballads over strings – a perfect combination, and a wonderful idea that was first executed on two LPs in the 50s: Music For Loving and Music With Feeling, both of which are reissued here with some extra unreleased material! Backings are by Ralph Burns and Billy Strayhorn – both of whom can be trusted to keep things hip, using the strings to create mood, emotion, and tension, instead of a pillow to smother the sound of Webster's incredible tenor work. Added to those two albums and bonus cuts is the even rarer Harry Carney with Strings session, recorded in the same era, and a perfect addition to the package that makes for over 3 LPs worth of material on 2 CDs, all packaged with great notes and some very cool Verve artwork! Titles include "Chelsea Bridge", "Some Other Spring", "Blue Moon", "Early Autumn", "My Fantasy", "Love Is Here To Stay", "Under A Blanket Of Blue", "You're Mine You", "Love's Away", and "All Too Soon".  © 1996-2021, Dusty Groove, Inc.
(Out of print.)

Count Basie At Newport (with bonus tracks)
Verve, 1957. Used
CD...$4.99
The 50s Basie band, loud and proud – recorded beautifully by Verve on the stage of the Newport Jazz Festival in 1957 – a great year, both for the group and the fest! The lineup here features Count Basie firmly at the helm on piano – with players who include Lester Young, Illinois ... CD