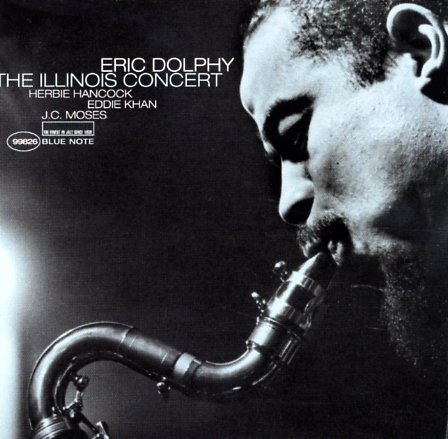 Amazing avant garde material from Dolphy – and never issued before in any form! The concert was recorded in 1963 at the University of Illinois, and it features some of the most "out" playing we've ever heard from Dolphy. He's backed by a trio comprised of Herbie Hancock, Eddie Khan, and JC Moses – and the main solos are on flute, alto, and bass clarinet, which Dolphy plays to amazing effect! 6 tracks feature the core quartet playing alone with Dolphy, and a 7th features backing by a larger group comprised of University Of Illinois students, including a very young Cecil Bridgewater! This is definitely the kind of lost material we're happy to see unearthed – and it's packaged and notated with the usual high Blue Note level of quality. Titles include "Softly As In A Morning Sunrise", "South Street Exit", "Iron Man", "Red Planet", and "GW".  © 1996-2021, Dusty Groove, Inc.
(Out of print, BMG Direct pressing.)

Candid Dolphy
Candid (UK), 1960. Used
CD...$2.99
A collection of work that Eric Dolphy cut for the Candid label in 1960 – most of it under the name of other leaders, pulled from a variety of records, and remastered here to make a strong collection of tracks that documents this semi-lost chapter of Dolphy's career. Given the strength of the ... CD