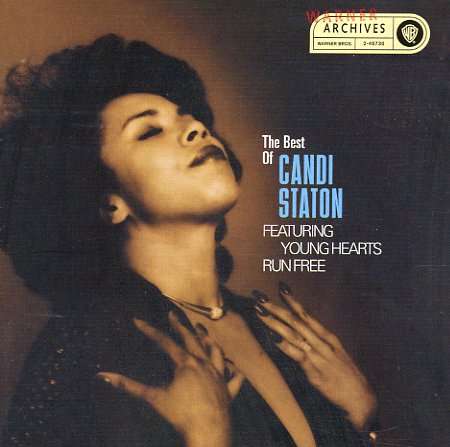 An interesting set of tracks that traces the roots of Candi Staton from a rough southern soul singer into a sophisticated diva whose transformation marked a similar path that was taken by many other artists from her generation. The 14 track compilation pulls together titles from Candi's albums on Warner during the years 1974 to 1980 – and it really runs through a number of different styles. Before her Warner recordings, Candi worked with Rick Hall at Muscle Shoals in a classic 60 southern mode. Rick handled her first few recordings for Warner in pretty much the style of earlier years, but Candi's real fame came with the track "Young Hearts Run Free", a perennial dancefloor and AM standard that was produced with a much slicker sound by Dave Crawford. The move proved to be a good one for Candi, and as you'll hear on this CD, she actually ended up doing some great work with more uptempo and modern soul tunes than on the stock southern tunes of earlier days. Titles include "Halfway To Heaven", "Here I Am Again", "He's Making Love To You", "When You Wake Up Tomorrow", "I Ain't Got Nowhere To Go", "Six Nights & A Day", and of course, "Young Hearts Run Free".  © 1996-2022, Dusty Groove, Inc.
(Out of print, promotional stamp on booklet cover.)

Back In The Day – The Best Of Bootsy
Warner, Late 70s/Early 80s. Used
CD...$3.99
A funky trip through the classic Warner Brothers recordings of P-Funk maestro Bootsy Collins! The set's a pretty great introduction to Bootsy's work, and includes some of his best numbers, plus a great set of notes that will really help you navigate his rich career. There's a total of 14 tracks, ... CD

Fire On The Bayou (plus bonus track)
Warner/Sundazed, 1975. Used
CD...$9.99
A big 70s classic from The Meters – a set that broke the group way out of the indie funk ghetto, and firmly put them on the map with a larger soul audience at the time! There's still plenty of roots in the music, but there's also a bit more attention to the overall song structure too – ... CD

Love Potion
Warner/Acrobat (UK), 1976. Used
CD...$11.99
Great later work from New Birth – quite different from their earlier albums, and much tighter overall – done with a smooth sophisticated modern soul groove that's light years ahead of their early party soul! The group's a lot more unified here – with less of the traded vocals and ... CD

Make Way For Dionne Warwick (Japanese paper sleeve edition – mono & stereo mixes, plus bonus tracks)
Scepter/Warner (Japan), 1964. Used
CD...$34.99
It's plenty easy to make way for Dionne Warwick with an album as great as this – the kind of set that spawned countless imitators in later years, but which still sounds better than most of the rest! Hearing the record is almost like going back to the headwaters of 60s pop – especially ... CD