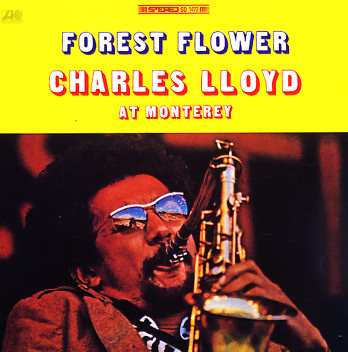 A famous album – and for good reason too! The set's something of a landmark in spiritual jazz from the 60s – and it features a classic live performance from Charles Lloyd, recorded at the Monterey Jazz Festival – almost as a distillation and popularization of ideas that were brewing in the music of John Coltrane, Eric Dolphy, and others! The group here features a young Keith Jarrett on piano, Cecil McBee on bass, and Jack DeJohnette on drums – all flowing magnificently with Lloyd's work on tenor and flute – in an open-ended groove that draws on modal rhythms for inspiration, and which features solos that stretch out, but never go "outside"! The classic performances of "Forest Flower" takes up all of side one – with a dreamy drifting quality that has Jarrett at his best – and side two features a version of his "Sorcery", plus McBee's "Song Of Her", and a version of "East Of The Sun".  © 1996-2020, Dusty Groove, Inc.
(Red & purple label stereo pressing. Vinyl has a number of light marks, but cover is still in nice shape.)