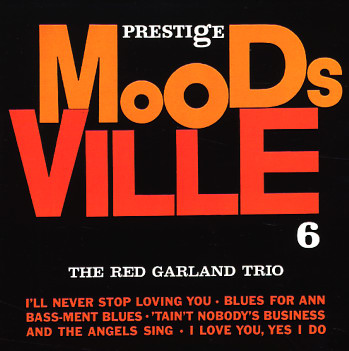 Red Garland's sound was already often mellow and laidback in the late 50s, but it takes on a whole new sense of that style here in a rare session for Prestige's Moodsville label! As with others on the imprint, the focus here is on the gentler sounds of the late nite scene – more ballads and easygoing numbers, but still played with a strong degree of jazz – and not the kind of cocktail modes that other labels would use when putting "moods" on the front of a record! Red's trio here is the familiar one from other Prestige albums – Paul Chambers on bass and Art Taylor on drums – and the only change, really, is that the tracks are all mellower ones, but still done with plenty of bluesy inflections on the keys from Red! Titles include "I Love You Yes I Do", "And The Angels Sing", "Blues For Ann", "I'll Never Stop Loving You", and "Bass-ment Blues".  © 1996-2020, Dusty Groove, Inc.
(Orange label Status pressing with RVG stamp. Cover has small sticker remnants at the top left on front, and some wear the bottom of the spine, looks great otherwise.)