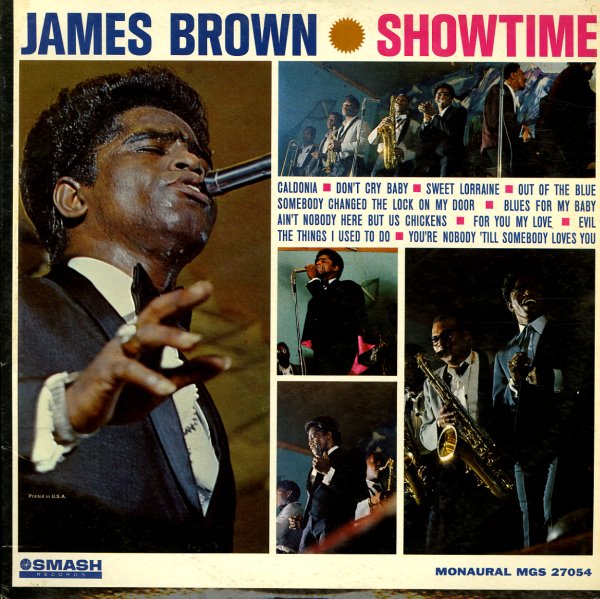 One of the odder James Brown records from the 60s – as it includes 11 studio tracks with overdubbed audience. James was under contract with King at the same time, and couldn't record new vocal material for Smash – so the record doesn't contain any JB originals, but covers of Louis Jordan style songs like "Caldonia", "Evil", "Nobody Here But Us Chickens". Certainly not The Godfather's funkiest moment, but proof that he could still swing in a hard R&B groove with the right backing.  © 1996-2022, Dusty Groove, Inc.
(Red label stereo pressing. Cover has some wear and aging, with a name in pen in back.)

Black Caesar
Polydor, 1973. Very Good Gatefold
LP...$28.99
James Brown gets even better than before – working here in the setting of a blacksploitation soundtracks – which makes the album a doubly funky outing from the 70s! James is a master throughout – beating Isaac Hayes and Curtis Mayfield at their own games – as he works with ... LP, Vinyl record album

Live At The Point After
Athens Of The North (UK), 1977. Sealed
LP...$9.99
Too young to have caught a 70s funk band in the clubs? Here's the solution – a rare performance by a cool combo from Tulsa – captured live in a very hip club setting! The mode here is different than sounds experienced on a funky 45 – as the tracks are open, long, and have a ... LP, Vinyl record album

Hustle With Speed
People, 1975. Very Good+
LP...$49.99
One of the most fantastic albums by the JBs – a masterpiece of funky jamming, tight instrumentation, and that free yet tight style of the James Brown 70s years! The tracks are longer than on some of the earlier singles – especially the 8 minute jammer "(It's Not The Express) It's ... LP, Vinyl record album

Barry White Presents Mr Danny Pearson
Unlimited Gold, 1978. Very Good+
LP...$28.99
A lost treasure from Barry White – the one and only album recorded by Danny Pearson, one of the few singers that Barry did as "special projects" during the 70s! Like Gloria Scott and Tom Brock – two other White-produced singers of the time – Pearson's got a wonderful ... LP, Vinyl record album