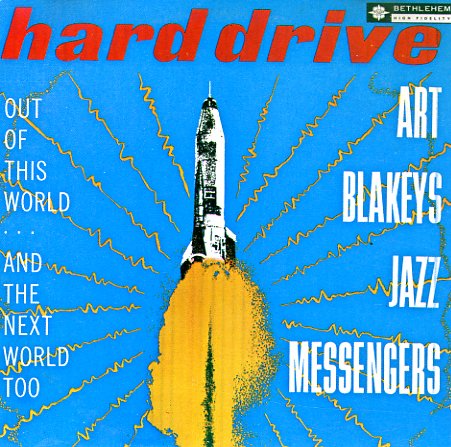 A well-titled set from Art Blakey – considering the hard-driving sound of the group! The album's one of the best from that unusual year of 1957 – almost a "lost" year for Art, when he was working away from Blue Note with a very different lineup of the Jazz Messengers than on his famous sessions for that label! The players here are all great – and include Johnny Griffin on tenor, Bill Hardman on trumpet, Junior Mance on piano, and Spanky DeBrest on bass – all working with a style that's a bit loose and open, allowing plenty of space for solos! Griffin's horn has all the sharp edges you'd expect, and Hardman's great too – and Blakey himself seems to sit back a bit more than usual in his chair, letting the soloists lead the tracks, instead of kicking things into gear from the drums. Titles include "Deo X", "Sweet Sakeena", "Late Spring", "Krafty", and "For Miles & Miles".  © 1996-2023, Dusty Groove, Inc.