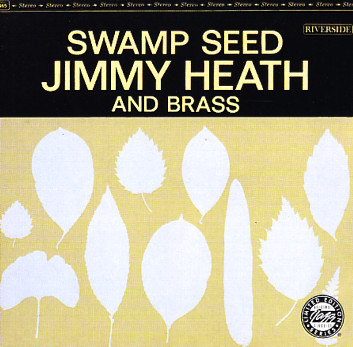 Early genius from Jimmy Heath – a set that displays both his talents on the tenor sax, and his growing role as a jazz arranger! The style here is still relatively simple – with Heath's saxophone offset by a range of brass players who include Donald Byrd on trumpet, Julius Watkins on French horn, and Don Butterfield on tuba – all shading in the tunes with great tones and colors, and providing a lot more depth than just the usual hardbop session! Heath is the main soloist, along with pianist Harold Mabern (or Herbie Hancock on a few tracks) – and Donald Byrd occasionally gets in some nice licks as well. Titles include a number of very nice soul-jazz oriented originals – with the tracks "D Waltz", "Wall To Wall", "Six Steps", and "Swamp Seed".  © 1996-2022, Dusty Groove, Inc.
(Beautiful 70s Japanese pressing, SMJ-6060, with obi and insert!)

New Picture
Landmark, 1985. Near Mint-
LP...$4.99
A compelling mid 80s set from Jimmy Heath – playing here on both tenor and soprano saxes, in a group that features piano, guitar, bass, and drums. The mix of guitar and Jimmy's soprano sax is especially striking – angular and edgey, handled in a way that brings an added dimension to ... LP, Vinyl record album

Waltz For Debby
Riverside, 1961. Very Good-
LP...$79.99
An incredible album from Bill Evans – and maybe THE record you need in your collection if you're trying to understand his contribution to jazz! The album's one of Evan's first sides from the Village Vanguard – and features the legendary trio that included Scott LaFaro on bass and Paul ... LP, Vinyl record album

Kelly Blue
Riverside, 1959. Good
LP...$24.99
A great little session from Wynton Kelly – one that has him breaking out of the lyrical roots of his trio work, and hitting some harder notes as a leader of a larger hardbop group! The album features Kelly working in both trio and sextet format – the latter with players who include Nat ... LP, Vinyl record album

Best Of Wes Montgomery (Riverside)
Riverside, Late 50s/Early 60s. Very Good
LP...$4.99
A collection of sides cut in the early 60s by Wes for Riverside, collected later when the label was owned by ABC. There's a couple of cuts in a nice organ trio feature the great Mel Rhyne "Round Midnight" and "Yesterdays", plus several that feature his brothers Buddy and Monk ... LP, Vinyl record album

Get Happy With The Randy Weston Trio
Riverside, 1955. Near Mint-
LP...$14.99
An early full length album by Randy Weston – one that mostly features tunes by other composers, all given a slightly modern twist at the piano! The style here isn't as arch-modern or African-inspired as some of Weston's other 50s work – but it's still plenty darn great, and very much ... LP, Vinyl record album